The Director and Actor Who Were Meant for Each Other

Rarely if ever has a collaboration between artist and muse yielded such rich cinematic treasure.

Master director Akira Kurosawa and his favorite actor Toshiro Mifune worked together on sixteen films in as many years. Most of these titles achieve a very high level of quality and hold up beautifully, while a few are truly brilliant.


When the young director first spotted his future star at an audition shortly after the end of the Second War, the would-be actor was flailing around in a fit of intensity that took Kurosawa aback.


Never one to be unduly impressed by histrionic actors, Kurosawa could not get Mifune’s wild performance out of his head. So he hired him for the movie that would establish his own reputation as an up-and-coming director, “Drunken Angel” (1948).


Two years later, “Rashomon,” their third outing together, opened to lukewarm reviews. Then someone thought to enter it in the Venice Film Festival, where against all odds it won top prize.


“Rashomon” became an international sensation virtually overnight, winning an Oscar as the outstanding foreign film of 1951. More importantly, it opened up the Japanese film market to the rest of the world. Kurosawa would quickly become the most recognized Japanese director outside Japan, and Mifune the most recognized face.

Indeed, Kurosawa would always be more popular in the West than in his native land. Many of his films were remade in the States, the most famous example being 1960’s “The Magnificent Seven,” a Western adaptation of 1954’s “Seven Samurai.” (The regard was mutual: Kurosawa loved American films, and in particular idolized director John Ford.)


Kurosawa and Mifune would build on their success over the next fifteen years, alternating between period samurai features and modern-day titles. Their final collaboration was on 1965’s “Red Beard” where lingering tensions between these two very strong men would finally erupt.


An estrangement of nearly three decades followed. While Mifune’s career held, he realized that his best work was behind him. Kurosawa, meanwhile, went into a slump that precipitated a suicide attempt in 1971. Fortunately, he rebounded and would come back to make several more films, including his late epic, “Ran” (1985).


The two men had no contact until they both attended the funeral of “Godzilla” director Ishiro Honda in 1993. There, they embraced tearfully, perhaps sensing this might be their last opportunity to reconcile. Both men would pass away within a year of each other: first, Mifune on Christmas Eve, 1997, then his mentor the following September.


Of course, the enduring work they did together will never die. It was a match made in...Japan. 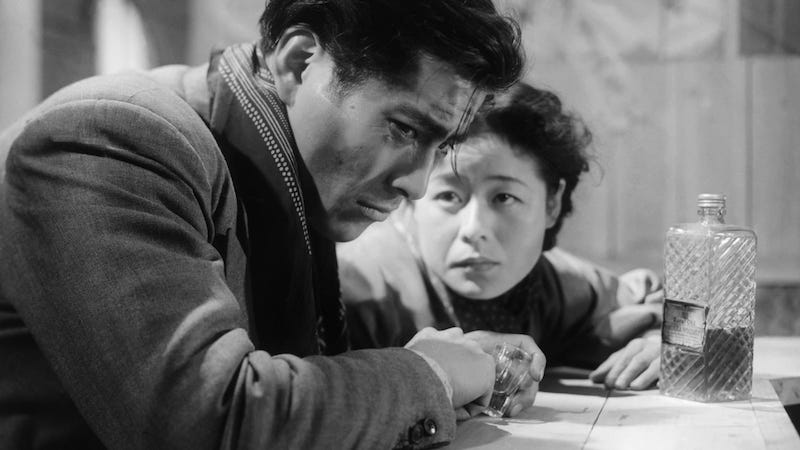 Dark, atmospheric drama concerns an alcoholic doctor who treats tubercular gangster Matsunaga (Mifune) at his seedy clinic. The two men gradually develop a bond, but even the well-meaning doctor can’t help his volatile patient when Matsunaga’s old boss gets out of jail. 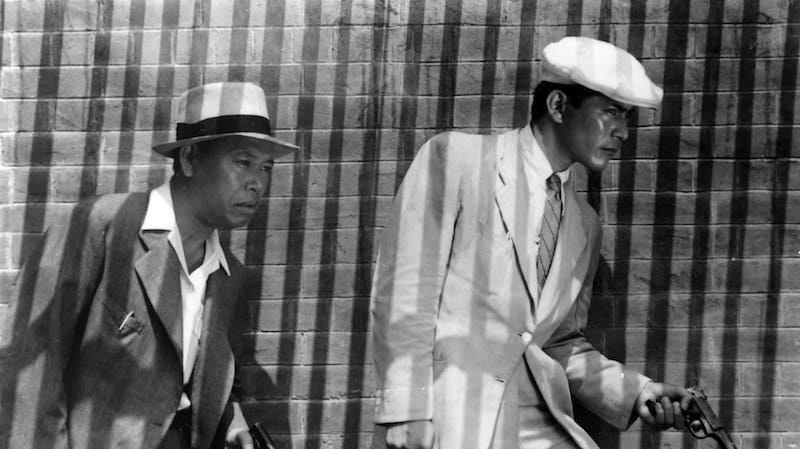 Japanese noir features Mifune as a rookie cop who loses his gun to a pickpocket on a crowded bus. He ultimately discovers the gun was used in a homicide, compounding his guilt and urgency to nab the culprit. Soon we recognize there’s only a thin line separating the vengeful detective from his quarry. 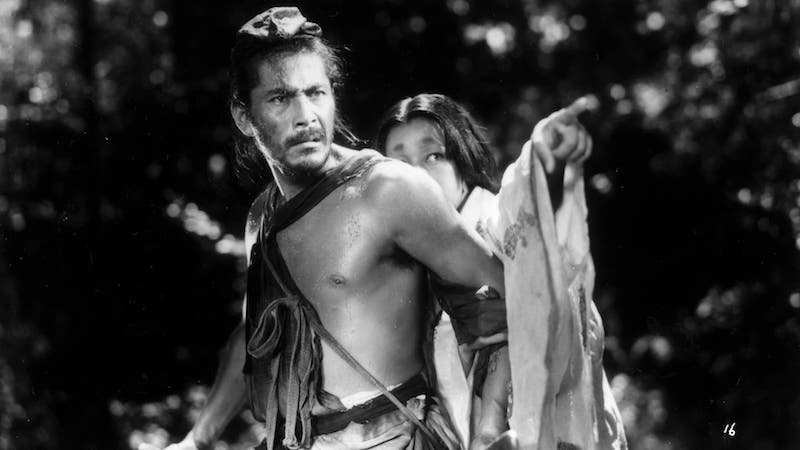 Dreamlike film concerns the shifting, subjective nature of memory. A thief (Mifune) confronts a couple on horseback in the woods — the man is killed, the wife raped. Yet the recollections of the thief and the other witnesses to the crime differ markedly, creating doubt as to what really happened. 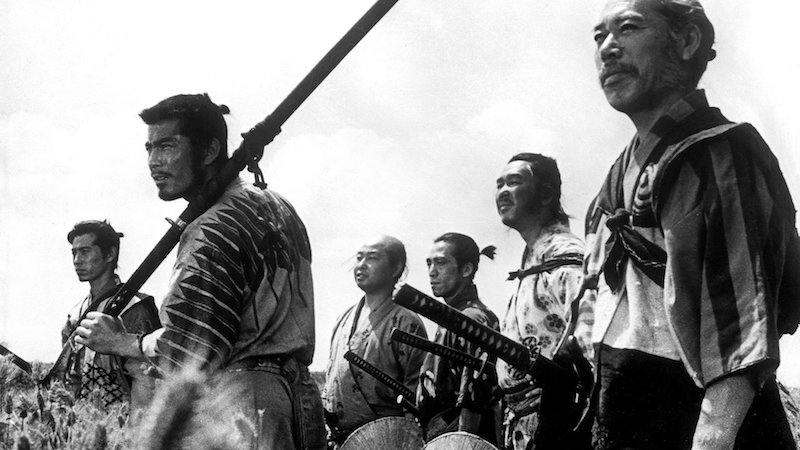 A group of townspeople in feudal Japan are terrorized by bandits who come every year to steal their rice crop. Desperate, they hire a team of samurai to train and protect them when the next assault happens. Mifune plays a loudmouth braggart who nevertheless is very good with a sword. 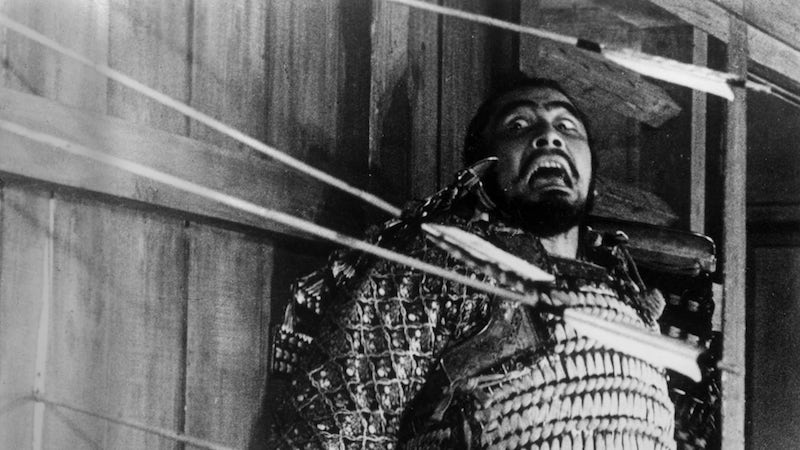 Here Mifune plays a warrior returning from battle who encounters an old female mystic. She predicts his unlikely rise to power, and when her prophesy starts to come true, the warrior and his wife decide to hasten the process. Kurosawa’s adaptation of “Macbeth” fires on all cylinders. 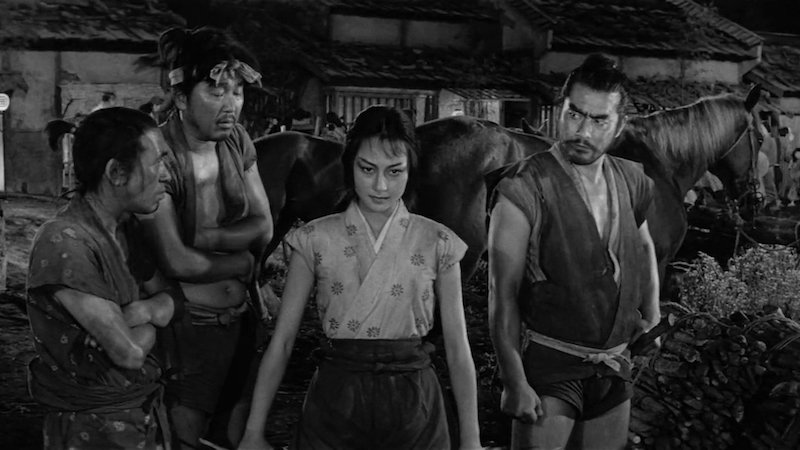 During a feudal war, two bumbling peasants help a noble samurai (Mifune) and the silent young woman in his charge get past enemy lines with a large cache of gold. This diverting adventure tale features a leavening dose of humor, and became George Lucas’s inspiration for “Star Wars”! 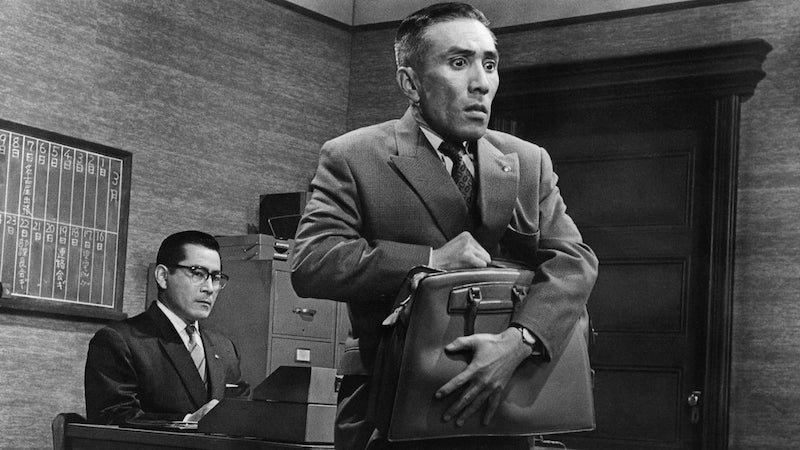 In this tense, modern day variation on “Hamlet,” Mifune plays an executive who weds the boss’s daughter. But is he marrying for love? We gradually discover that he carries a longstanding grudge against his father-in-law. Though fond of his wife, vengeance is what really drives him. 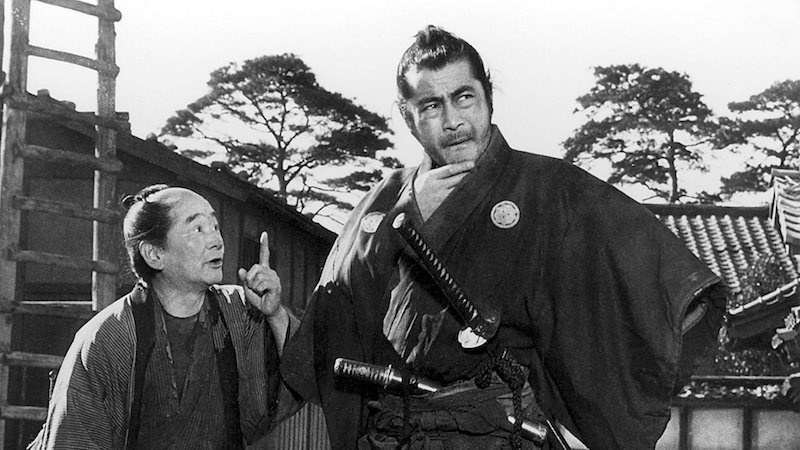 Mifune is Sanjuro, a samurai for hire who secretly cuts a deal with both warring sides in a village, then sits back to observe all the chaos while the residents cower behind closed doors. This darkly amusing tale of manipulation was remade by Sergio Leone as “A Fistful of Dollars,” with Clint Eastwood. 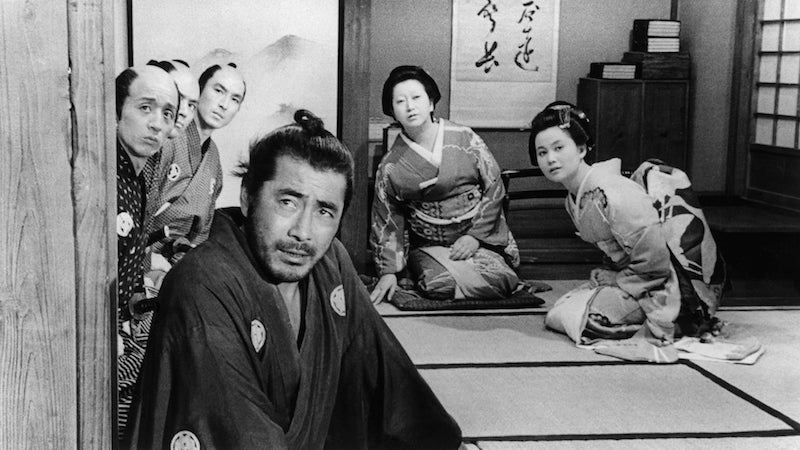 In this entertaining sequel to “Yojimbo,” the uncouth but fearless Sanjuro (Mifune again) helps an aspiring samurai and eight of his pals save the young man’s uncle, a high government official who’s been arrested on trumped-up charges. Mifune has lots of fun here — and so do we. 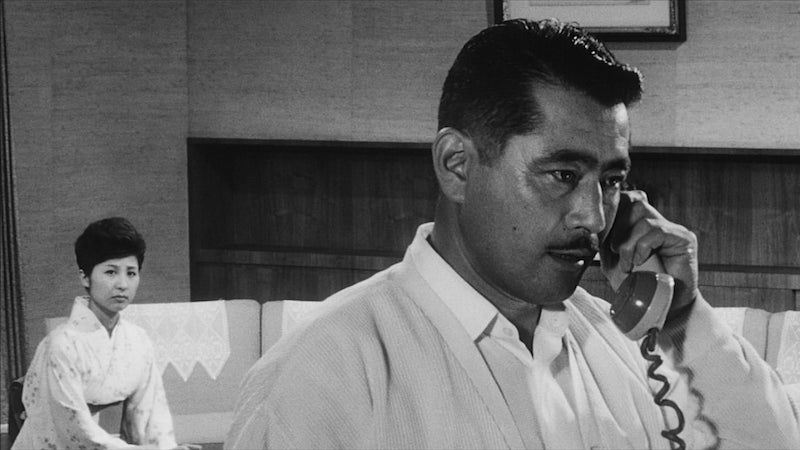 Mifune plays the head of a successful shoe company forced to deal with kidnappers who mistakenly abduct his chauffeur’s son rather than his own. At first reluctant to pay, he soon realizes he must do all he can to save this child’s life. Kurosawa adapted this gripping story from an Ed McBain novel!

More:  8 of the Best Modern Japanese Movies Every Film Lover Should Watch

Why "North by Northwest", Hitchcock's Most Entertaining Film,