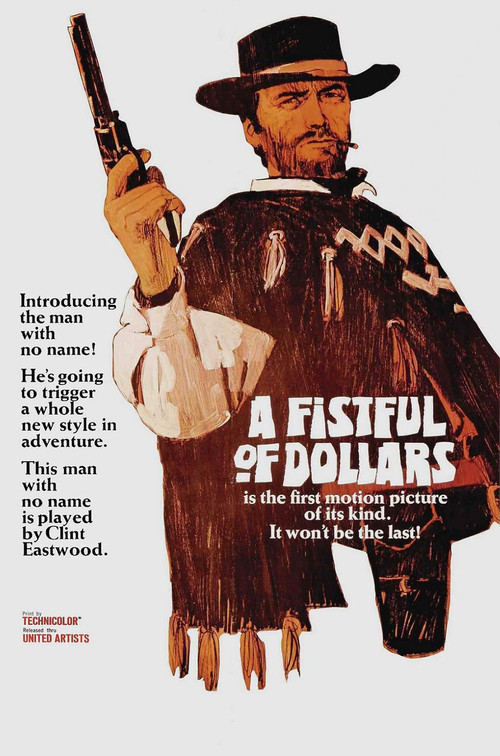 A Fistful of Dollars

A drifting, unnamed gunslinger (Clint Eastwood) rides into the sleepy Mexican town of San Miguel, where he learns that two rival gangs, the Baxters and the Rojos, have wrested control of the weapons and liquor trades, and are now in a fragile truce. After witnessing Ramon Rojo (Gian Maria Volonte) rob and kill members of a Mexican cavalry unit, he sees an opportunity to pocket some gold, deciding to hire himself out to both gangs and play them off each other.

Filmed in Spain and loosely modeled after Kurosawa’s “Yojimbo,” Leone’s “Dollars” was the first classic of the so-called spaghetti westerns, introducing Clint Eastwood in his iconic role as “The Man with No Name.” Eastwood reprised the role in two subsequent outings with Leone, and became a huge star in Europe, where audiences ate up his ill-tempered, laconic, violence-prone screen persona, quite a departure from his stint on TV’s “Rawhide.” Westerns were never the same again after this nameless gun legend rode into movie history, leaving a trail of gore in his wake, and paving the way for Sam Peckinpah’s “The Wild Bunch,” among others.