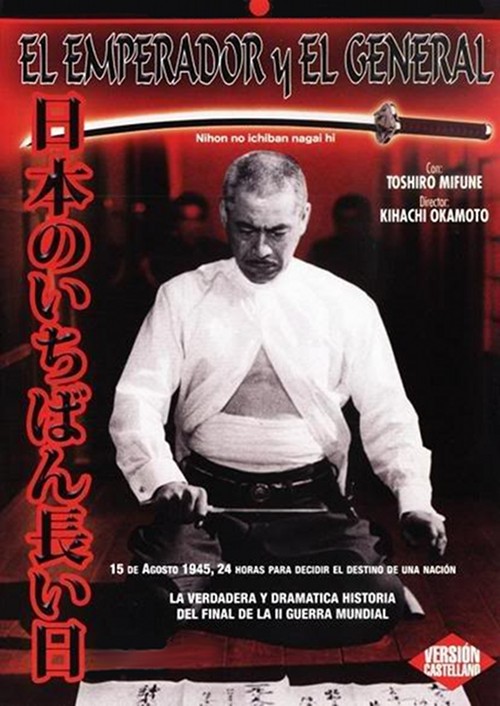 In early August, 1945, Japan stood alone against the Allies, the Nazis having surrendered unconditionally in May. Even with two devastating atomic bomb attacks destroying two key cities, the Japanese cabinet cannot reach a decision to surrender, largely due to a military hard-line contingent, led by War Minister Anami (Mifune), who believes a decisive battle must first be fought on Japanese soil. At a deadlock, the Emperor himself must make the final decision, but even when surrender is resolved upon, pockets of fanaticism persist down the chain of command. Thus we re-live the fateful twenty-four hours of August 15th — Japan's longest day.

This woefully unheralded war classic came five years after our own "Longest Day," and matches that film in conveying all the complexities of turning the tide of war; indeed, in this case, bringing it to a deeply humiliating, almost unthinkable conclusion. Japanese soldiers had been indoctrinated to fight to the last man for the glory of the Empire, so surrender is unthinkable to many. The film's power emanates from the slow-burning agony of impending defeat. Mifune is very much front and center as the War Minister who must shoulder the burden of making his troops submit to the Emperor's edict. A fascinating, minutely-detailed film of Mount Fuji-esque proportions.

Jason and the Argonauts