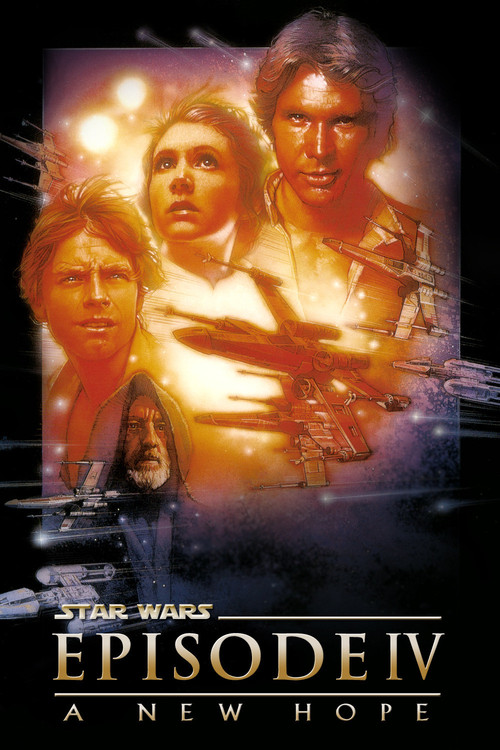 In a far distant universe, an intergalactic battle plays out between good and evil. Luke Skywalker (Hamill) longs to join the freedom struggle and gets his wish when two robots, R2-D2 and C-3PO (voices of Baker and Daniels) bring him a plea for help from the kidnapped Princess Leia (Fisher). Luke seeks out the help of Obi-Wan Kenobi (Guinness), a Jedi warrior who teaches him the secret of The Force. Joining up with Han Solo (Ford), a cynical pilot for hire, and his hairy sidekick Chewbacca (voice of Mayhew), Luke blasts off for the imperial Death Star and its evil leader Darth Vader (voice of Jones).

Drawing inspiration from Japanese samurai sagas, old sci-fi serials, and the westerns of John Ford, Lucas created one of the most influential genre pictures of all time. With its blend of rollicking action, outlandish sci-fi creatures, off-hand humor and epic story-telling, this innocent, mythical movie seems to have near-universal appeal. The special effects are still stunning, and John Williams’s award-winning score provides a stirring musical backdrop. Guinness lends gravitas, while Ford sets the bar for suave, wisecracking action heroes; this kicked off his career as a major movie star. His scenes with Fisher crackle with sexual tension, while the droids are great comic sidekicks. Witty, reverential, groundbreaking, and thrilling, few films reach this pinnacle of pure entertainment.