How Our Scariest Movie Got Made 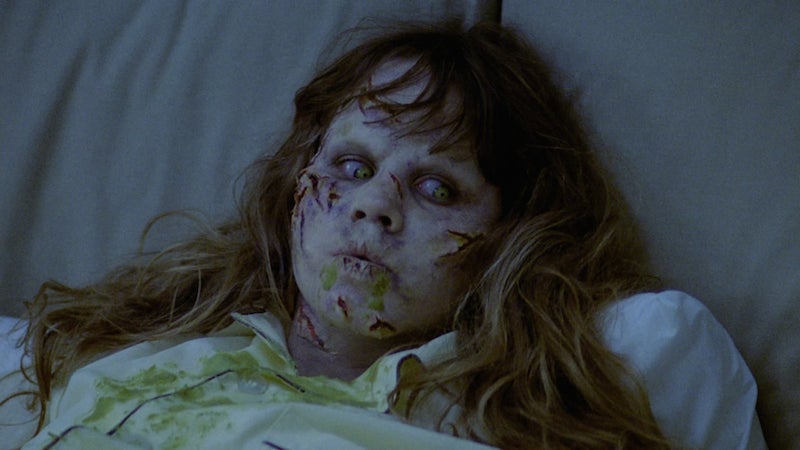 Released the day after Christmas, 1973, “The Exorcist” was an immediate sensation.

In its first few weeks in theaters, stories abounded of viewers fainting, becoming nauseous or leaving the theater in tears. One man who passed out from fright and hit his head actually sued Warner Brothers, the studio that released the film.

Warner’s could afford a lawsuit, since “The Exorcist” was already a runaway box-office hit. Adjusted for inflation, it is still the highest-grossing “R” rated film. It would also become the first horror movie nominated for a Best Picture Oscar. 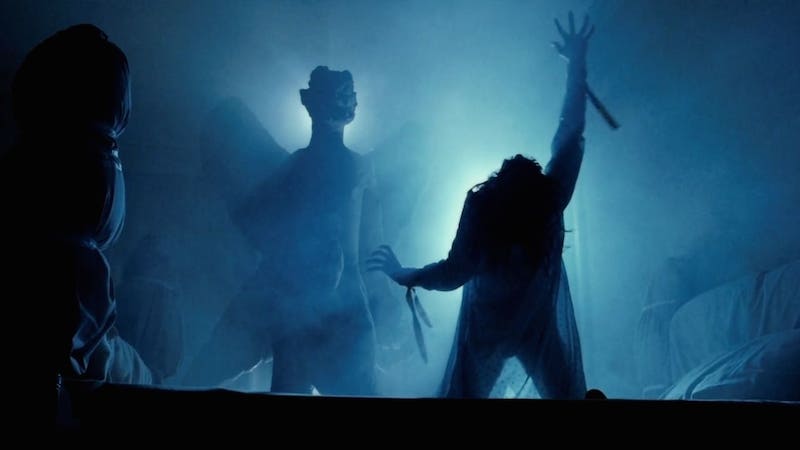 It is difficult if not futile to try to name the scariest movie ever made, but when I consider my own personal pick, I always think of “The Exorcist.”  I’ve always found it more frightening than, for example, the first horror movie to actually win Best Picture at the Academy Awards: “The Silence of the Lambs” (1991).

The story of how this groundbreaking film got made is almost as fascinating as the movie itself.

It all started with William Peter Blatty, who’d written the best-selling novel on which the film was based and also penned the screenplay. Astonishingly, up to that time Blatty had primarily been known as a comedy writer, earning screenplay credit on several Blake Edwards movies, most memorably the classic Inspector Clouseau outing, “A Shot in the Dark” (1964).

Blatty, a devout Catholic, was the son of Lebanese immigrants who’d won a full scholarship to Georgetown University in the late forties. While there, he’d heard about a priest performing an exorcism on a young boy in the suburb of Mount Rainier. The story had even made the papers.

Now, two decades later, it inspired him to try something new: a serious book about the fundamental struggle between good and evil, and the challenge of maintaining faith in the midst of it. These themes would be explored through the story of a young girl in Washington, D.C. who undergoes an exorcism.

Halfway into writing the book, Blatty sensed he was on to something special. As he jokingly put it, “I could hardly wait to finish the book so I could become famous!” 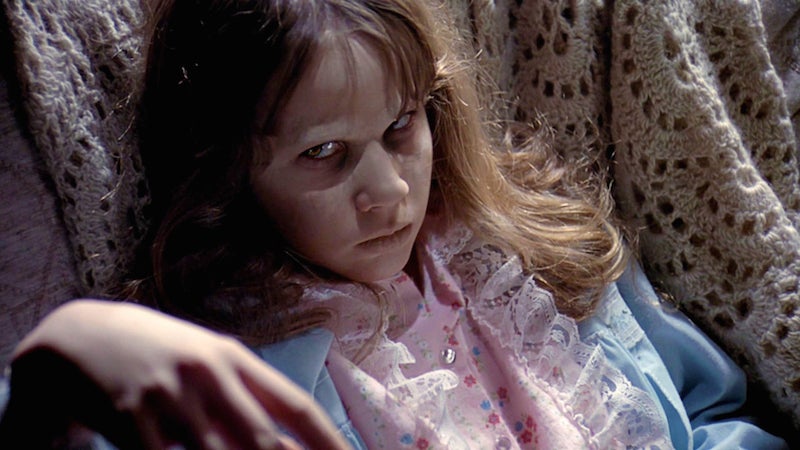 His instincts were right. The book sold thirteen million copies, so in negotiating the film rights with Warner Brothers, Blatty had considerable leverage. He specified that he wanted to be closely involved in selecting the director.

The first candidates advanced by the studio were impressive: Mike Nichols, Arthur Penn, and Peter Bogdanovich. Yet each passed on the project, with Bogdanovich particularly regretful after the fact. Finally, journeyman director Mark Rydell agreed to come on-board.

Then Blatty remembered an incident from several years before. He’d done a screenplay with Edwards based on the director’s successful “Peter Gunn” series, and Edwards had invited an up-and-coming director named William Friedkin to comment on it.

In Blatty’s presence (not knowing he’d written it) and in the nicest way possible, Friedkin had told Edwards it was “a piece of shit.” Far from being offended, the writer was struck by Friedkin’s fearless honesty.

Now this young man was suddenly a hot commodity, having just snagged an Oscar for directing “The French Connection” (1971), a film that also won Best Picture. Blatty decided to send him his screenplay for “The Exorcist.”

Friedkin received it and started reading. He’d be a no-show for a dinner engagement because he couldn’t stop. He called Blatty the next day and said he wanted to do it. Blatty pushed hard with the studio and soon enough Friedkin was in, Rydell was out. 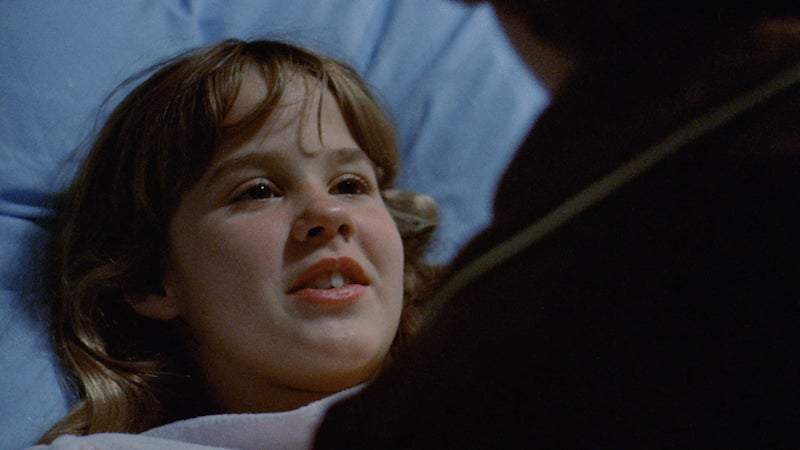 The ensuing production would encounter multiple delays and hurdles, starting with casting. It took forever to cast the pivotal role of Regan MacNeil, the little girl who gets possessed by a demon. Friedkin auditioned scores of juvenile performers (including a young Laura Dern), before settling on twelve year-old Linda Blair.

Though Blair’s agency had sent in multiple other candidates, they’d somehow overlooked her. It was Linda’s mother who pushed for and won the audition.

Blatty had written the part of Regan’s mother, Chris, with his good friend Shirley MacLaine in mind, but inexplicably, she passed on this to make another vastly inferior but similarly themed film, “The Possession of Joel Delaney” (1972). 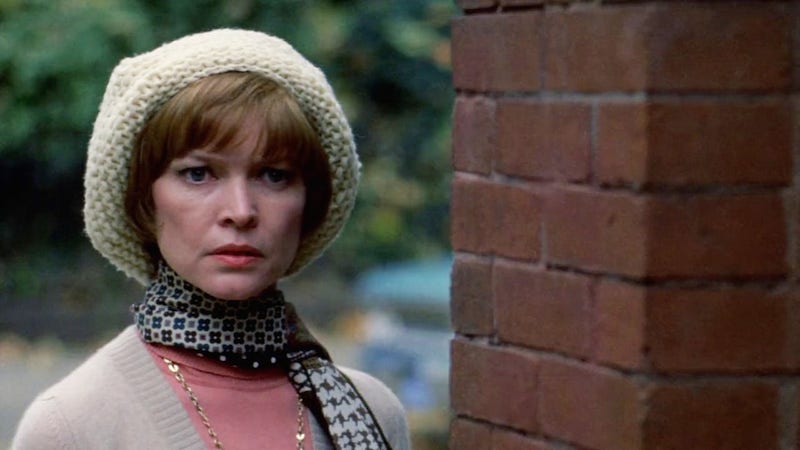 Audrey Hepburn was the next choice, but she would only do it if the film could be shot in Europe. Meanwhile, Ellen Burstyn, who’d been Oscar-nominated for her performance in “The Last Picture Show,” was lobbying hard for the part. Her persistence paid off.

A host of actors tried out for the part of the younger priest, Father Karras, including Stacy Keach, Al Pacino, even Jack Nicholson, whom Friedkin judged insufficiently holy. He eventually selected Jason Miller, whom he’d recently seen in a play and who, for him, exemplified Catholic guilt.

1973 would be an amazing year for this playwright, actor and poet: beyond making his screen debut in this film which would earn him his only Oscar nomination, he would also win the Pulitzer Prize for his hit play, “That Championship Season.” 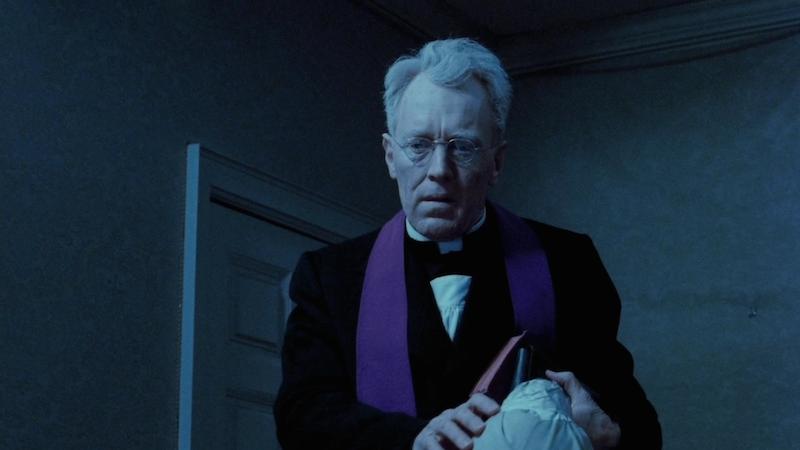 For the title character, Father Merrin, there was some initial interest in Marlon Brando, but Friedkin decided he would overwhelm the film. He had always wanted Swedish actor Max von Sydow for the part, even though at 44, he was considerably younger than the character he would play.

Von Sydow accepted and quickly realized he’d be spending almost as much time in the make-up chair as Linda Blair. The process of turning him into an older man took nearly three hours each day.

Perhaps the most inspired casting choice was someone we never actually see: veteran actress Mercedes McCambridge, whose gravelly voice was ideal for the demon inside Regan. At first, she was willing to go unbilled, but later sued for screen credit and got it.

The wonder of this production is that it happened in the days before digital special effects, so that all the incredible moments we remember on-screen had to be done mechanically. It was an arduous, painstaking process but also incredibly exciting, as Friedkin and his crew were continually innovating to get the best results. Nevertheless, not everything went right.

The famous scene where Regan’s bed is shaking was done using hand cranks, and Linda Blair had to be put in special rigging as she is being pounded up and down on the bed.  When the rigging broke, she injured her back.

When Chris MacNeil is thrown violently back by her daughter, Burstyn was in a special harness which yanked her too hard and also broke, landing her on her coccyx and causing a permanent spinal injury. 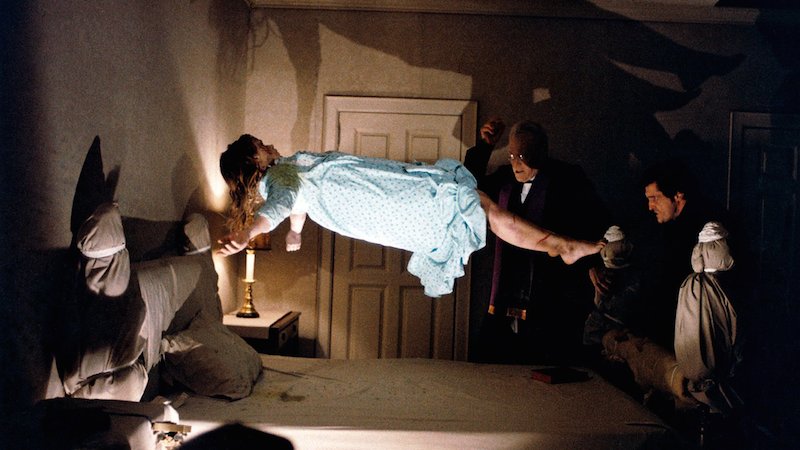 A key aspect of the story is the frigid temperature created by the demon in Regan’s room, so it was vital that you could see everyone’s breath in these scenes. Thus the set had to be kept at subarctic temperatures, which was particularly tough on young Linda, in heavy makeup and clad only in long underwear and a nightgown.

Shooting time was always limited because eventually the hot lights would raise the temperature in the room and the effect was ruined. Then cast and crew would have to break until the temperatures again reached sub-zero, then set up and shoot again. Also, the huge A/C units kept malfunctioning, causing more delays.

Finally, there was the challenge of depicting the truly shocking moment when Regan projectile vomits on Father Karras. It required placing special tubes in Blair’s mouth that would gush forth pea soup with the push of a button. It was cumbersome and uncomfortable, with extra Eileen Dietz stepping in for the extensive “puke testing” process.

When we see Regan vomit on Father Karras’s face in the film, Jason Miller’s astonishment is genuine. It was a malfunction as the tests had the soup landing on his midsection.

By the end of the shoot, Friedkin and Blatty had fallen out over a scene during the exorcism, when the two priests take a break and discuss what they’re experiencing just outside Regan’s room. To Blatty, this exchange was vital to the audience understanding what the movie was about, while Friedkin felt it was extraneous and too expository. The director prevailed, and the scene was cut for initial release. This conflict cast a pall over their friendship.

All differences were set aside, at least temporarily, as the film became an instant sensation. “The Exorcist” was nominated for ten Oscars, including nods for Miller, Burstyn, Blair and Friedkin — and won two, for Blatty’s screenplay and for sound effects. Roger Ebert described it as “one of the best movies of its type ever made.” 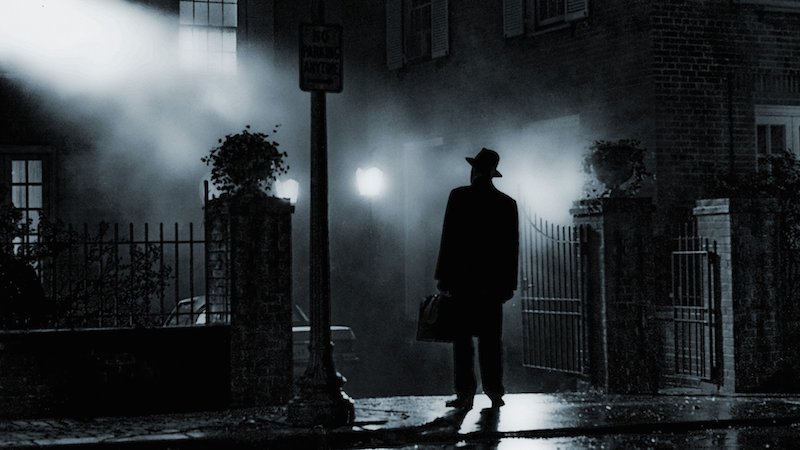 Twenty-five years later, it was time for a re-release. Older and wiser, Friedkin thought back to his conflict with Blatty over that one scene all those years before and regretted his arrogance in overruling him.

He decided to re-edit the film to include it and a few other sequences, including one where a possessed Regan comes swiftly down the stairs on all fours, her tongue darting out and the front of her body facing up like a spider. It is a petrifying moment, achieved via a body double who happened to be an contortionist.

This new, longer cut, clocking in at 135 minutes and dubbed “The Version You’ve Never Seen,” was released theatrically in 2000 and on home video in 2004.

William Peter Blatty, who died early last year at age 89, was touched by this generous act, and the two men reconciled for keeps. It just goes to show that sometimes, even horror movies have happy endings.

1993 Was a Singular Year for Movies