For the Smart Crowd

Even though much of the appeal of horror movies lies in their power to tap into primal fears, I’d like to think our cerebral cortexes have evolved to the point where we want our thrills to test our minds as well as our nerves. After all, horror movies often leave the greatest, and most lasting, chill when they hinge on psychological, rather than fantastical, terrors.

The higher the intelligence of the piece, the harder it is to dispel that chill, and the more elegant the premise, the more likely it is to stay lodged in our psyches. Smarter scary movies just seem more believable, even when they are set in space, or when ghosts crawl out of the television.

Not surprisingly, a large percentage of such titles are adapted from works of fiction. The “interior” aspect of fiction reminds us that the worst nightmares are often conjured not by reality but by our own imaginations.

This October we pay tribute to horror movies that ditch the dopey college kids, urban legends, and cheap stunts in favor of the cold, creeping, dawning awareness that things are really not okay. 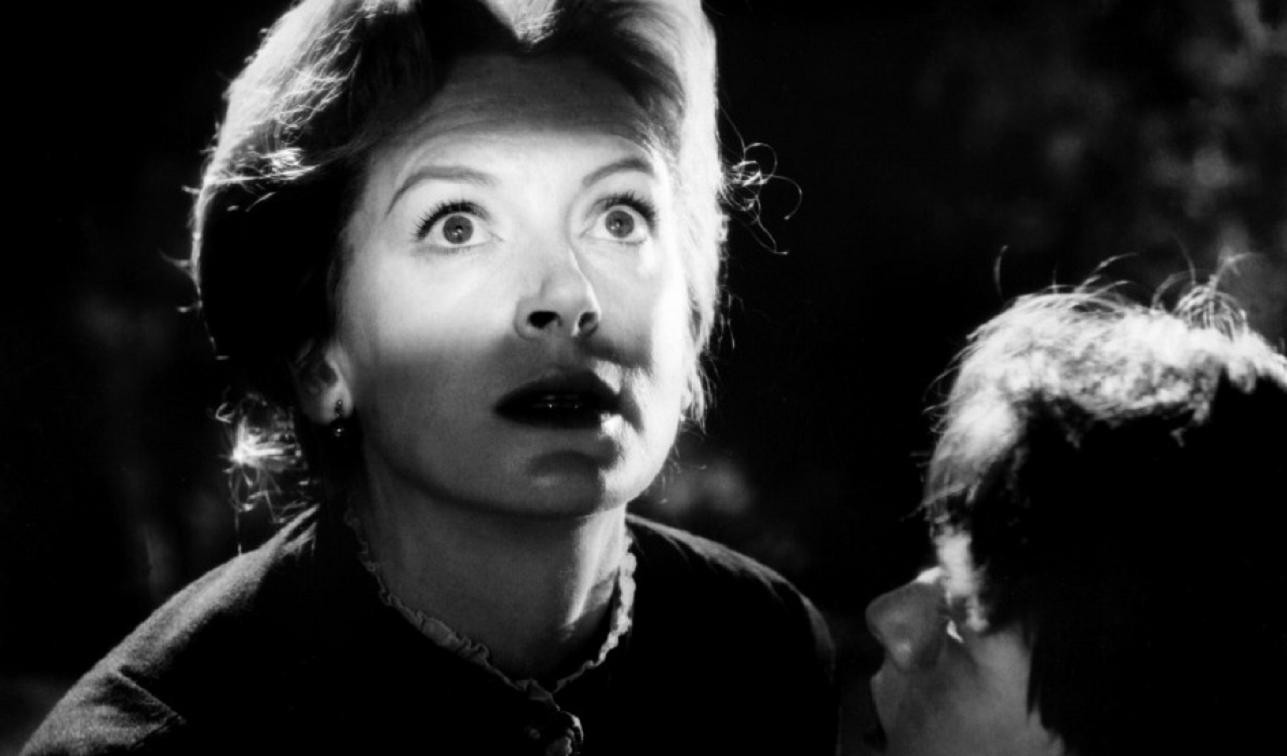 Based on Henry James’s ghost-meets-governess novella, “The Turn of the Screw,” “The Innocents” asks: is it the house that’s haunted, or the children under the governess’s care? Moreover, is there any ghost at all? The dead appear, the children act ominously, and their nanny Miss Giddens (Deborah Kerr) vows to protect them. Truman Capote received shared credit for the screenplay, which likely accounts for the thick layer of Freudian subtext. Still, it’s one spooky affair.

A movie that announces up front there will be ghosts, or at least there’d better be, Robert Wise’s subtle film version of Shirley Jackson’s splendidly rattling novel, “The Haunting of Hill House” (1959) delivers on its promise. Possibly unstable and paranormally experienced Eleanor Vance (Julie Harris) shows up to help paranormal researcher Dr. Markway (Richard Johnson) prove that the house is haunted, but the house seems to know her already. Though hewing to the conventions of the haunted house template — all that banging in the middle of the night, and spectral visitations —“The Haunting” deploys the intelligence of scientific reason as reality blurs. A bona fide classic. (Avoid that execrable remake!)

Set in the heart of New York City, this modern-day Faustian tale runs on the growing paranoia of pregnant Rosemary (Mia Farrow), who may have reason to suspect others are after her unborn baby. The stellar cast includes John Cassavetes as her vain husband, as well as Ruth Gordon and Sidney Blackmer as the elderly neighbors. The milieu of the New York theater scene, that stately apartment in the real-life Dakota, and Mia Farrow’s preternaturally childlike Rosemary, all contribute to a steady, dreadful, rising tension that never quite breaks — not until the last freaky moment. Director Roman Polanski’s American debut is a knock-out...

Still grieving the sudden death of their young daughter, John Baxter (Donald Sutherland) and wife Laura (Julie Christie) travel to Venice in winter, where they find not only a labyrinth of dark, wet, deserted passageways and canals, but also a pair of mysterious sisters, one of whom claims to bear a warning from the dead child. Director Nicolas Roeg innovates a visual style that includes flashbacks and flashforwards to ratchet up the creepiness and keep the protagonists and audience alike off balance. Nuanced performances continue to ground the picture as occult elements take over, avoiding even a hint of camp. Trust me: Venice was never this forbidding. 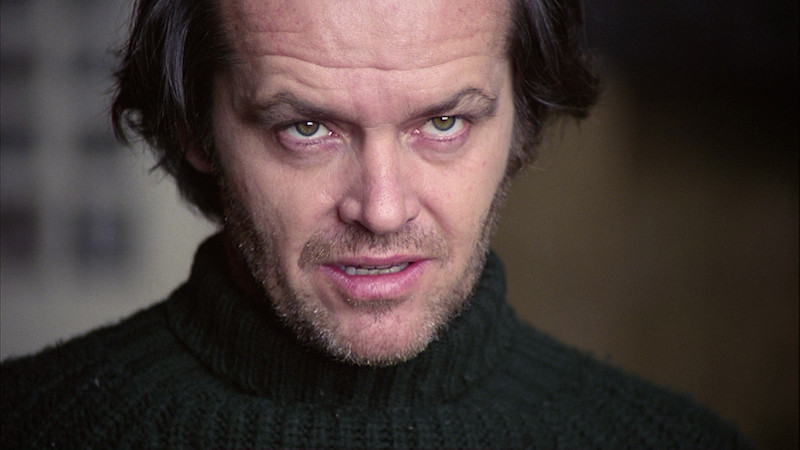 From Stephen King’s chilling novel came director Stanley Kubrick’s classic film charting the gradual breakdown of writer Jack Torrance (Jack Nicholson) in a remote hotel where he’s serving as caretaker in the off-season. What makes “The Shining” shine? For one thing, there’s Kubrick’s judicious and sophisticated use of shock. (The iconic image of the twin girls, for instance, was inspired by a Diane Arbus photo.) For another, there’s that ambiguous ending, which fans and philosophers will debate forever. Nearly four decades after release, this remains a work of of virtuosic originality. 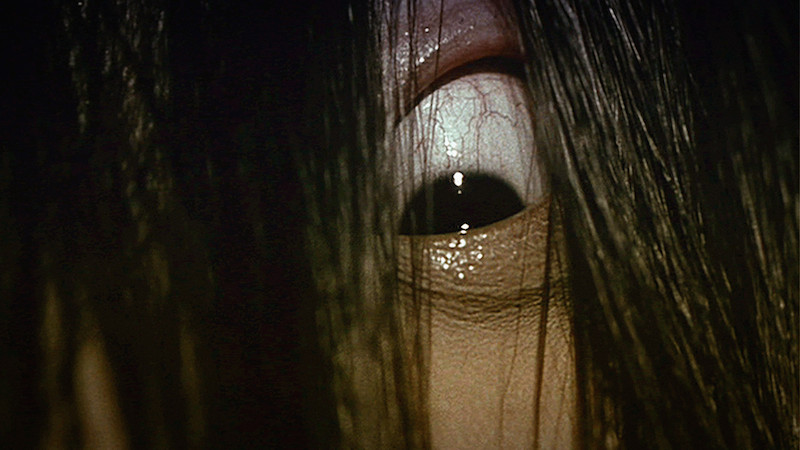 Horror often trades on strangeness for its success, and Japanese horror may be the strangest of all. This movie’s premise — that anyone who watches a certain videotape will die within a week — is stunning in its simplicity. Adapted from Koji Suzuki’s 1991 novel, “Ringu” is the highest grossing horror movie in Japan’s history. And no wonder. Reportedly, Suzuki got his inspiration for this from another horror film from America: 1982’s “Poltergeist.” Watch both films and you’ll catch the similarities. B-r-r-r-r! 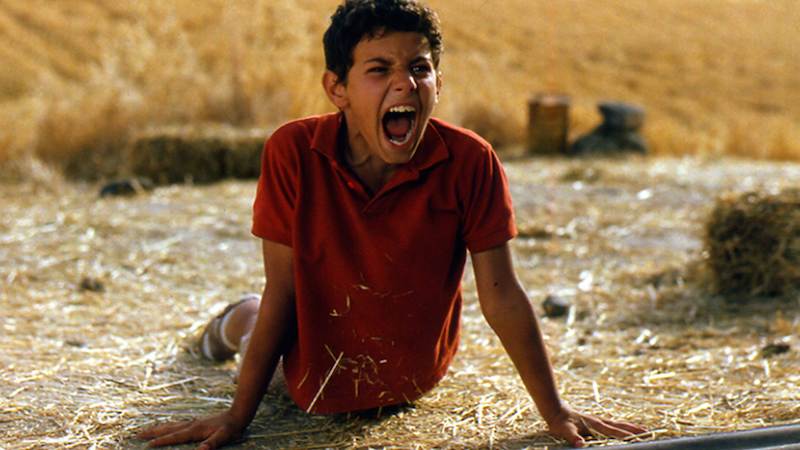 Though some will quibble that this is more suspense than horror, I myself was unable to live up to the film’s title; I was plenty scared. This tale of Michele (Giuseppe Cristiano), a young peasant boy who lands in a proverbial hornet’s nest when he discovers a kidnapped rich kid held captive in a hole, offers plenty of unexpected jolts. Director Gabriele Salvatores adapts Niccolò Ammaniti’s 2001 novel to chilling effect, thanks in large part to the naturalistic performances of non-professional actors. Told from a child’s point of view, the tension mounts as Michele realizes who the perpetrators are. 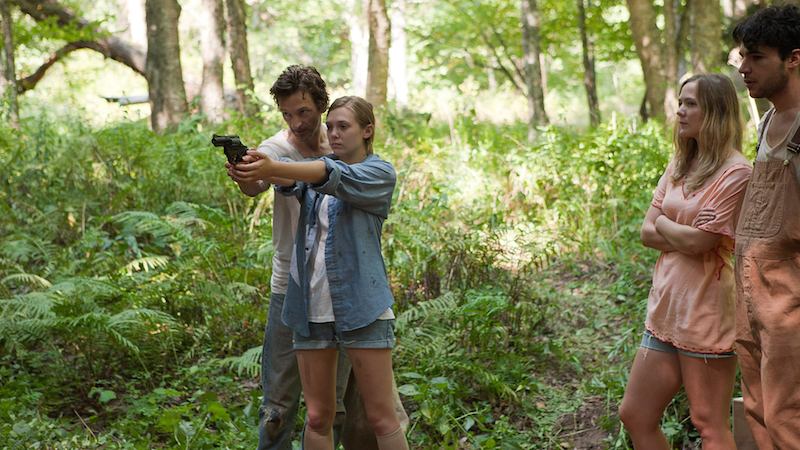 When Martha (Elizabeth Olsen) flees from a Manson-esque cult in the Catskills ruled by the brutal, hypnotic Patrick (John Hawkes) and finally arrives at the home of her pregnant sister, it only appears that Martha has found safety. What follows is a slow accretion of facts, delivered with impressive sure-handedness by director Sean Durkin, informing us why Martha is exhibiting signs of severe mental stress. It ain’t pretty. The awareness of just how long Patrick’s reach is, and what he will do with it, freezes the blood. The result is a brand of horror that leaves the lasting imprint of the truly horrifying.

More:   Can You Watch These 5 Scary Scenes Without Jumping?

Which Horror Movie Has the Best Soundtrack?

From FilmOracle:  The 25 Best Thriller Movies on Netflix Right Now

More Horror for the Smart Crowd

You Should Stream on Netflix Tonight!