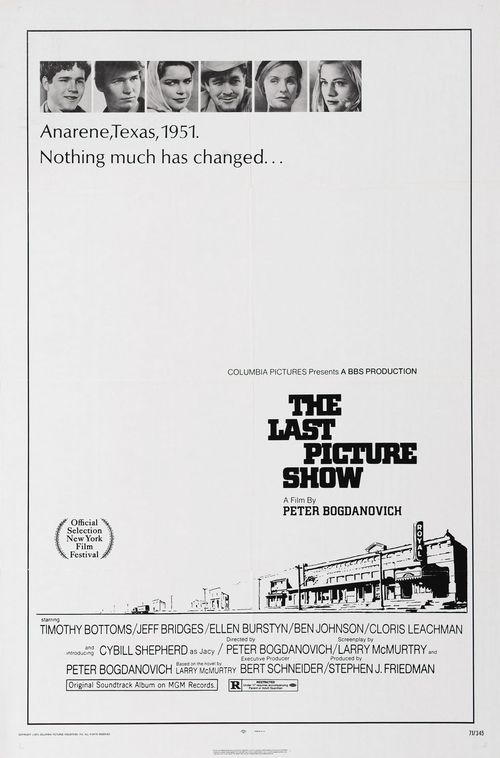 Two close friends, the sensitive Sonny (Bottoms) and athletic Duane (Bridges) live in the small dying town of Anarene, Texas, circa 1951. With more of its residents moving to the big city for better opportunities, Anarene exudes a stifling remoteness and decay. To cope with this oppressive atmosphere and stave off some tough decisions coming up after their graduation from high school, Sonny takes up with his coach's neglected wife (Leachman), while Duane chases after vain, wealthy town beauty Jacy (Shepherd). Still, neither relationship seems to work for long. In fact, only Sam the Lion (Johnson), who owns Anarene's last movie theatre, provides a measure of dignity in the life of the town, recalling a happier, healthier past.

Along with "Paper Moon," this film endures as director Peter Bogdanovich's crowning achievement, a poignant film about people and places that life has passed by. Masterfully shot in black and white, Bogdanovich and cinematographer Robert Surtees evoke an atmosphere of slow, dusty suffocation, as the town's various sad residents go through the motions of their bankrupt lives. At the Oscars that year, the film received four acting nominations (for Bridges, Johnson, Leachman, and Ellen Burstyn, who plays Jacy's mom), with additional nods for Direction, Cinematography, and Screenplay. Only Leachman and Johnson actually took home statuettes; awards aside, this "Show" is a winner.