The Early Life and Career of Marilyn Monroe

Up to now, I’ve always hesitated to do a piece on this enduring icon and casualty of Hollywood, simply because so much has already been written about her tragic life and tumultuous career — reportedly well over 500 books. Finally, I resolved to focus on the details of her early life which shaped the fragile, tortured person she’d become.

I thought I knew the whole story, but revisiting it still shocked me: Marilyn was born Norma Jeane Mortenson to an emotionally unstable, impoverished mother in Los Angeles; her real father was unknown, and certainly not Mr. Mortenson, who was separated from Norma Jeane’s mother before she was conceived. Her mother placed her in a foster home shortly after birth, then took her back when Norma Jeane was seven. She then had a nervous breakdown. Finally diagnosed a schizophrenic, she’d be in and out of institutions for the rest of her life. 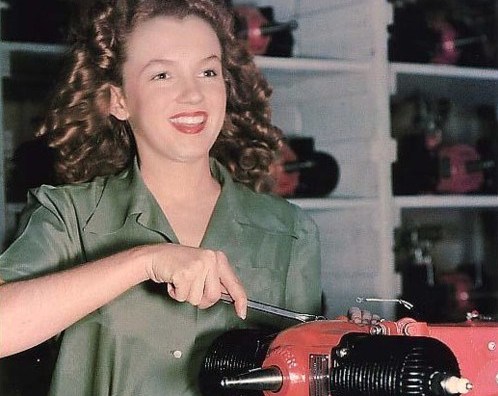 Norma Jeane lived with the boarders her Mother had taken in, and another lodger in the house molested her a year later; she was just eight years old. Then came another foster home, then an orphanage at age nine. Next, she went to live with her guardian Grace McKee Goddard, whose husband sexually abused her when she was eleven. Next came another foster family, then another, then incredibly, back to the Goddards.

Norma Jeane dealt with these ongoing traumas and upheavals through fantasy, a coping mechanism that naturally drew her to movies. As she remembered: “"When I was five I think, that's when I started wanting to be an actress. I loved to play. I didn't like the world around me because it was kind of grim, but I loved to play house. When I heard that this was acting, I said that's what I want to be. Some of my foster families used to send me to the movies to get me out of the house, and there I'd sit all day and way into the night. Up in front, there with the screen so big, a little kid all alone, and I loved it."

At 16, she almost had to return to the orphanage when the Goddards were relocating out of California. Instead a hasty marriage was arranged to a man Norma Jeane barely knew, a 21-year-old Lockheed worker named James Dougherty. About that short-lived union she said: “I never had a choice. They couldn't support me, and they had to work out something. And so I got married. It didn't make me sad, but it didn't make me happy either. My husband and I hardly spoke to each other. This wasn't because we were angry. We had nothing to say.” 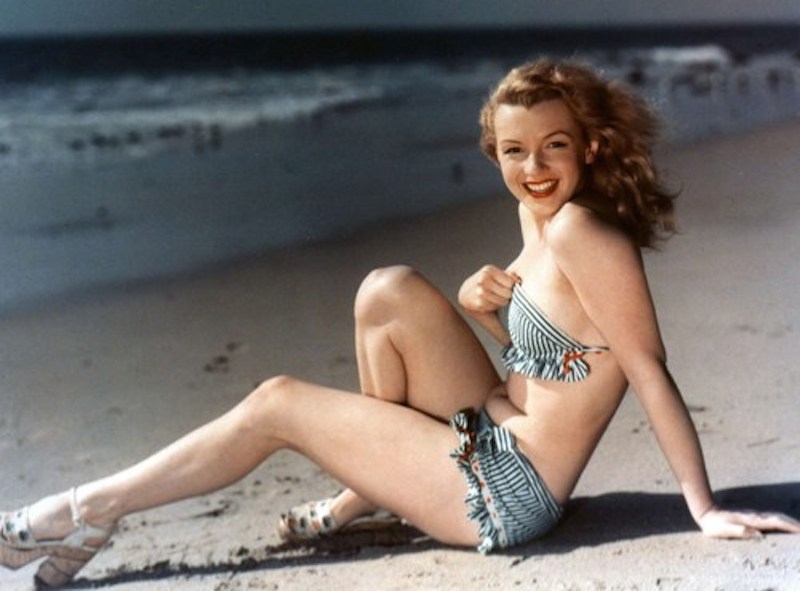 In late 1944, a photographer on assignment spotted Norma Jeane while she was working at a munitions factory, and her modeling career began. Her curves suited her for pin-up modeling and over the next several years, she made her living posing for “cheesecake” photos. She’d divorce Dougherty in 1946, and set her sights on becoming a movie star. She was first signed to a short-term contract at Fox that same year, where her name was changed to Marilyn Monroe.

Her horrific childhood gave her a clear-eyed pragmatism and toughness about what it would take to get ahead. She had no illusions about the extent of her acting talent, and was not hesitant to use her natural gifts to get ahead. In the late forties and early fifties, she’d submit to the “casting couch” with a host of important producers and studio heads (including Joe Schenck and Harry Cohn) — all much older, most highly unattractive, but each with the power to advance her career. Much later, Marilyn even made light of it: “Speaking of Oscars, I would win overwhelmingly if the Academy gave an Oscar for faking orgasms. I have done some of my best acting convincing my partners I was in the throes of ecstasy.”

After Fox, Marilyn went to Columbia, then in 1951, back to Fox with a seven-year contract, negotiated by her agent at William Morris, Johnny Hyde. (One of the few people in Hollywood who truly cared about her, she was bereft when Hyde dropped dead the same year.)

Though grieving, Marilyn was still going to ride the wave to fame; this was what she and Johnny had been working for all along. By the time she returned to Fox, she’d gone from walk-ons in bad movies to speaking parts in a couple of great ones: specifically, “All About Eve” (1950) and “The Asphalt Jungle” (1950). The studio began to realize this sultry actress might become the next big sex symbol, helping drive more men into theaters. They started building her profile and casting her in larger roles. 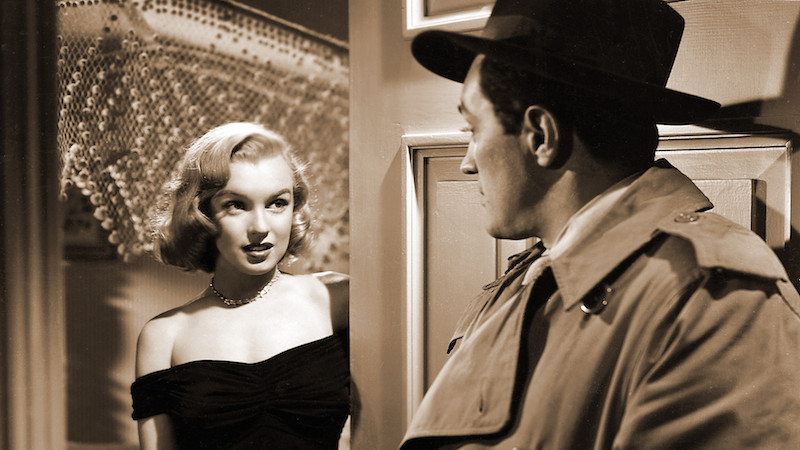 Within two years, with the 1953 release of “Niagara” and “Gentlemen Prefer Blondes,” Marilyn was the hottest up-and-coming star in Hollywood. By this point she had evolved into a fully-formed sex goddess, having (over the years) undergone electrolysis to raise her hairline, oral surgery to repair her overbite, and finally, dying her hair a striking shade of platinum.

Of course, fame never brought the happiness that had always eluded her. Over the next eight years, she’d reach an unprecedented level of celebrity that for her became a terrifying, isolating prison. She felt she was considered a “thing” to be gawked at, not a human being worthy of respect. And for the most part, she was right.

Though one of Hollywood’s most bankable performers, she was never paid what she was worth. (Her contemporary Elizabeth Taylor, for example, always earned far more.) Increasingly, she also struggled to break free of the typecasting that took root early on with the public, despising her “dumb blonde” image. Though she studied incredibly hard to learn her craft, she believed she would never be taken seriously as an actress, and undermined her career through drug abuse, chronic tardiness, and other neurotic behavior. She had two high-profile marriages that failed; she wanted desperately to have a child, but couldn’t. 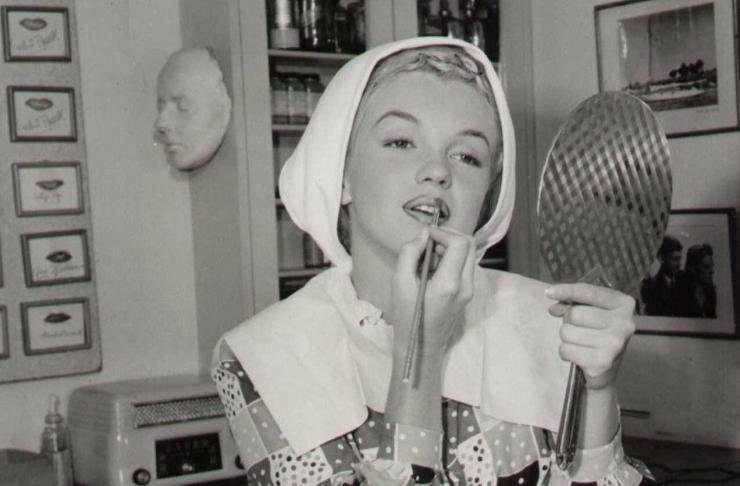 Deeply insecure and conflicted, Marilyn became a bundle of contradictions. Proud of her figure and outspoken about her sexuality, she still hated being pigeonholed as a sex object. At one moment, she might say: “I want to be a big star. It’s something precious.”, and then later remark: “Hollywood’s a place where they pay you a thousand dollars for a kiss and fifty cents for your soul.” Fundamentally, she seemed to have it all, but simply couldn't win.

In the early morning hours of August 5, 1962, Marilyn was found nude, face down on her bed, clutching her phone in one hand. We’ll always wonder who she was reaching out to at the very end. Whoever it was, it was already too late.

Now over half a century later, we ask the inevitable question: with just a decade-long span in films and very few great movies to her credit, why has Marilyn Monroe remained so firmly implanted in our collective consciousness? What particular spell did she cast over us?

It seems most everyone has a theory, but to me, it boils down to an extremely potent combination of raw sexuality and aching vulnerability: the first, her tool for survival in a corrupt, nasty world; the second, an open wound from her earliest days that could never be fully hidden- or healed.

Exuding this rare quality as she did, women couldn’t really hate her, and men desired her, but also wanted to protect her. Marilyn Monroe was always, essentially, a little girl lost, and our hearts will forever go out to her.