When He Needed It Most

Peter Sellers was more than just funny; he was an astonishingly versatile actor. Even if you removed the bumbling, beloved Inspector Clouseau from his resume, he still had a remarkable list of roles to his credit, from the devious Clare Quilty in "Lolita" (1962), to his Oscar nominated turn as Chance in "Being There" (1979), to a variety of bullfighters, concert pianists, and nutty psychiatrists in-between.

But Sellers, who would've turned 89 today, actually passed on the role of Leo Bloom in Mel Brooks's "The Producers" (1967). Brooks has gone on record saying that the role was his for the taking, and it’s never been explained why he didn't take the part. Little-known fact: Sellers would play an important and unexpected role in that movie's success.

Brooks had approached Sellers to play the neurotic Bloom as early as 1964, when Sellers, The Beatles, and all things British seemed to dominate the entertainment landscape. How popular was Sellers that year? Well, he was the first man to appear on the cover of Playboy — how's that? According to Brooks, Sellers agreed to play the role but was never heard from again. That was Sellers — whimsical, difficult, and often erratic.

Of course, some would say that Sellers's mercurial personality fueled his genius for acting. His uncanny gift for voices and accents, plus his ability to submerge himself into a role, resulted in his being the first actor nominated for an Oscar for portraying three different characters in one film: "Dr. Strangelove or: How I Learned to Stop Worrying and Love the Bomb" (1964). 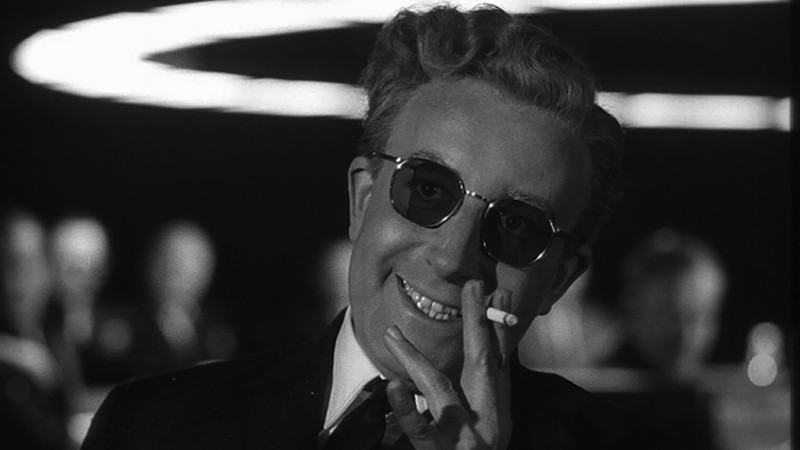 When acting wasn't enough to satisfy his voracious creative side, Sellers dabbled in the music business. His novelty recordings included a pair of duets with Sophia Loren and a rousing cover version of "Can’t Buy Me Love" and "A Hard Day’s Night." A heart attack at age 39 cast a shadow over his remaining years, but Sellers never slowed down. In fact, the sense that time was not on his side seemed to spur Sellers on to greater and loonier heights.

Cut to Los Angeles, 1967. Feeling restless on the set of "I Love You, Alice B. Toklas" (1968), Sellers accepted an invitation to a special screening of a Federico Fellini movie. For some unexplained reason the Fellini film wasn't available, so another feature was substituted at the last minute. It happened to be "The Producers."

Brooks had made his movie with the hilarious Gene Wilder as Bloom — according to some sources, Brooks had written the part for the relatively unknown Wilder in the first place — but Brooks still faced the hurdle of getting his film into theaters. Producer Joseph E. Levine wasn't convinced that middle America was ready for a movie featuring a song called "Springtime For Hitler." Embassy Pictures released it in a few cities, and seemed content to let it quietly disappear. 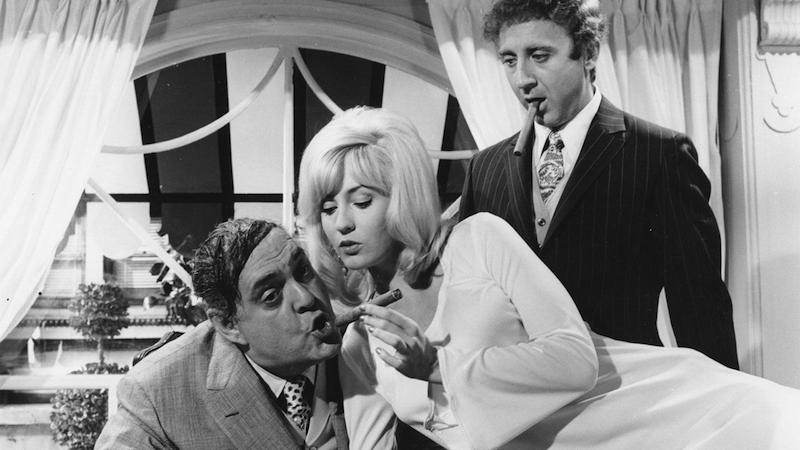 Yet here was Sellers watching it in stunned silence. When it was over, he knew he'd seen a crazy masterpiece. He'd worked on a Levine production earlier in the year, and felt compelled to call the producer that night. Sellers told Levine "The Producers" was one of the funniest films he'd ever seen, and demanded Embassy Pictures forget the limited screenings and give it a nationwide release. 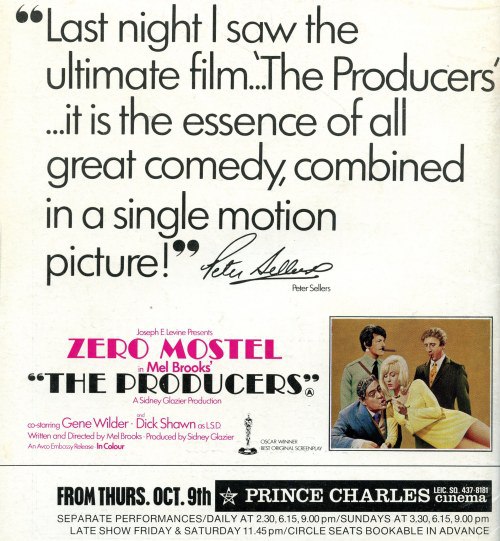 But Sellers wasn't done. The next day, he took out full page ads in two major newspapers heralding the movie as "...the essence of all great comedy combined in a single motion picture." Some cynics dismissed his fervor as another example of his flighty,unpredictable behavior, but Brooks later acknowledged that the star’s ringing endorsements saved the film.

It may well be that "The Producers" would have eventually found an audience without Sellers's backing, but Brooks, and the millions of fans who've enjoyed "The Producers," both on film and on-stage, definitely owe him a debt of gratitude.

And what was behind Sellers’ selfless actions, anyway? Did he feel some guilt over turning down the role of Bloom? Or was he simply praising the work of another comic master? With Sellers, you never knew. There was always some mystery behind the genius. I like to think that in an otherwise unhappy, tumultuous life, the art of comedy was his focus and his comfort, and when he saw the real thing, he felt obliged to ensure it was recognized and celebrated.

Peter Sellers left us too soon — his weak heart finally gave out at age 54 — but you can celebrate his birthday by enjoying one of the great films listed below. Incredibly, it’s been more than three decades since he passed away, but his ability to make us laugh is eternal.