in "The Great Escape"

I love Steve McQueen, and I know I'm not alone.

For me, it’s impossible to separate the "King of Cool" from his passion for anything with wheels, excepting wheelchairs and tricycles. 1968's "Bullitt" showed us what he could do in a souped-up Mustang. And five years prior, he displayed his motorcycle-riding prowess in the classic get-out-of-prison war film, "The Great Escape.”

RELATED:  Watch This, Not That: "Bullitt" Not "Fast and Furious 6"

Now here's an example of star power. Veteran director John Sturges added motorcycle sequences to the film as a concession to McQueen, who said he'd only play the part of Captain Virgil Hilts if he could display his skills on a bike. Sturges even let him tool around on his favorite make, a Triumph TR6 Trophy — which didn’t exist during World War II and had to be cosmetically modified.

In “Escape,” not only does McQueen perform nearly all the stunts for his own character, he actually dons an enemy uniform and appears as a Nazi motorcyclist during a pivotal chase scene. So, through the magic of editing, German Steve is hot on the trail of American Steve.

But wait-there's more. To secure a bike upon his escape, Hilts (McQueen) strings a wire across a road, and a German soldier cruises right into the booby trap. Guess who plays the poor, hapless fellow that takes the spill?  You guessed it- Steve again.

McQueen actually had to be held back from performing all the derring-do on wheels himself. This megastar was simply too valuable to be risking his neck for fun. 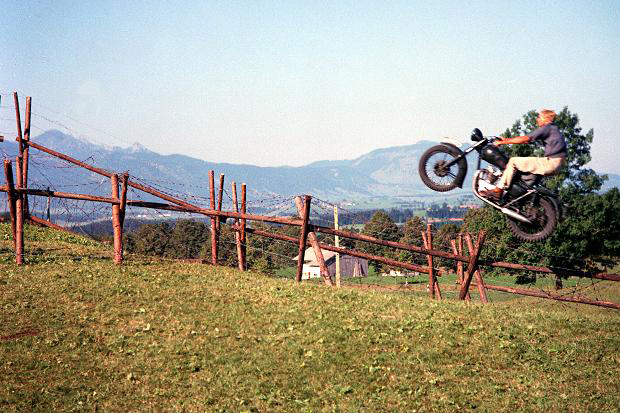 Example: for Hilts's big jump over a barbed-wire fence, McQueen was replaced by friend and stunt-double Bud Ekins, since Steve had already tried the feat himself and crashed. Once burned...

Even off camera, it seems McQueen stayed in character. Racing through a nearby German town one day, he and several other crew members were caught in a speed trap and promptly arrested. The Chief of Police sternly advised the sheepish actor, "Herr McQueen, we have caught several of your comrades today, but you have won the prize [for the highest speeding].” McQueen was briefly locked up in jail for the offense. I hope he brought his baseball and glove.

What's your favorite cinematic ride with Steve McQueen? Let me know on Facebook.

The 8 Best Firework Scenes in Film