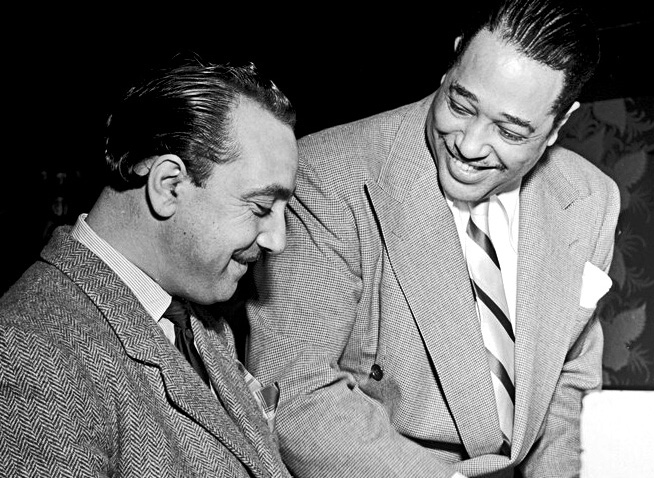 If you’re a fellow jazz lover, you probably look on Duke Ellington, born 115 years ago today, with awe. With a career spanning over half a century, Duke’s impact on jazz was incalculable. He not only played the piano with the deceptive ease and fluency Astaire brought to dancing, he led the best band in the business. He was a genius, and impossibly cool to boot. How so?

Beyond the music, Duke was elegance personified in a still highly segregated world. He was his generation’s Marvin Gaye, exuding a powerful sexual charisma that made him irresistible to women, regardless of race. His personal life was predictably chaotic as a result, but it seems as though everyone in Duke’s life understood: it was all about the music.

By the 1950s, his popularity was flagging a bit stateside. Most big band acts were folding, making way for “hipper” musicians like Miles Davis and Chet Baker. That all changed with his performance at the 1956 Newport Jazz Festival, when the Duke Ellington Orchestra caught fire and created something as close to perfection as you’re likely to hear. The lucky crowd was so enthralled that thousands of people “spontaneously started jitterbugging… hundreds of fans climbed on their seats [to cheer].” When their set ended, the crowd refused to disperse, screaming until Duke returned to the stage to placate the mob with more music. It’s a night that no one wanted to end.

That career-revitalizing evening exposed him to a new generation of fans, and won him a Time Magazine cover, becoming one of only four jazz musicians to earn that distinction.

In 1958, he composed the score for Otto Preminger’s gritty courtroom drama, “Anatomy Of A Murder,” starring James Stewart, Lee Remick and Ben Gazzara. One film historian described his work on this picture “as a landmark – the first significant Hollywood film music by African Americans comprising… music whose source is not visible or implied by action in the film." (Look for Duke tickling the ivories with Jimmy!)

Ellington kept at it for another fifteen years, until cancer claimed him in 1974. His last words: "Music is how I live, why I live, and how I will be remembered.” He got it right, up to the very end.

To honor Duke’s legacy and memory, here are a few other films that do justice to the particular magic that is jazz.

The 19 Most Undeserved Academy Award Wins