Everything You Need to Know About

the Elusive But Extraordinary Alec Guinness

Any list of the twentieth century’s finest actors is incomplete without Alec Guinness. Yet it’s a name some might overlook because there was never anything remotely showy — or even particularly magnetic — about him.

More than anything, Guinness relished the process of submerging himself completely in a role, disappearing into the characters he played. He took considerable pride in the fact that he could walk through any crowd unnoticed, and once stated: “Flamboyance doesn't suit me. I enjoy being elusive.”

His seeming ordinariness could not, of course, obscure his extraordinary talent. In fact, it lent a certain pathos to his work, even his comic outings. Most often he seemed to play essentially solitary figures. 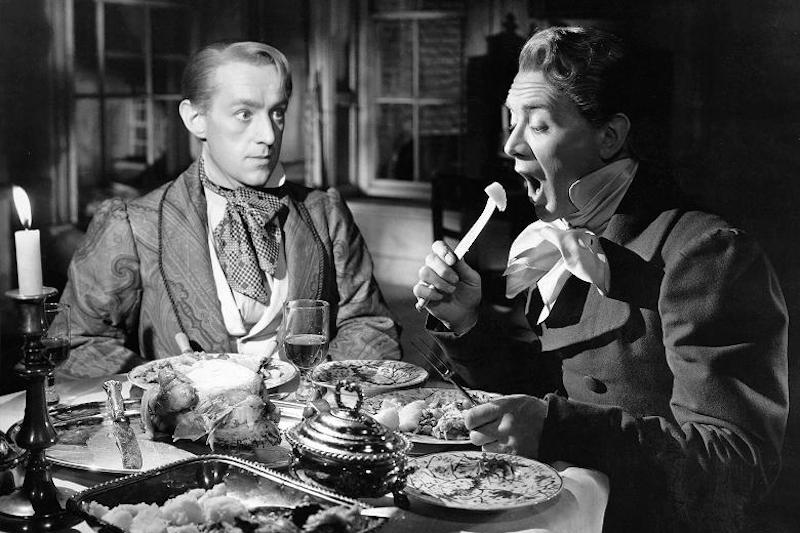 Alec Guinness de Cuffe was born in London in 1914, and was raised by his mother, never knowing who his father was. He was drawn to dramatics early on, and made his stage debut in 1934. Two years later, he joined the prestigious Old Vic theater company, where over the next several years, he essayed a variety of classic roles and first worked with many of his future co-stars in film, including Jack Hawkins and Anthony Quayle.

He entered the Royal Navy in 1941, and built up an impressive war record, among other things commanding a landing craft during the Sicily Invasion. After the war, he was approached by film editor-turned-director David Lean, who’d seen Alec years before in a stage adaptation of “Great Expectations.” Lean wanted him to recreate the role of Herbert Pocket on-screen. Guinness accepted, and thus started a rich collaboration between actor and director the would span two decades and five outstanding films.

In 1949, Guinness began a string of classic comedies with Ealing Studios; in his first outing, he stunned his public by playing eight separate characters in the ever-fabulous “Kind Hearts and Coronets.” Though he always returned to his first love — the stage, Guinness maintained his film career, both in England and Hollywood, over the next quarter-century.

He’d win the Best Actor Oscar in 1957 for his portrayal of a ramrod-stiff British officer in Lean’s World War II drama, “The Bridge on the River Kwai,” and three years later give one of his finest performances as a very different kind of soldier in Ronald Neame’s “Tunes of Glory” (1960), reuniting with his “Expectations” co-star John Mills.

In 1976, Guinness got the opportunity to play Obi-Wan Kenobi in the original “Star Wars.” He met with writer/director George Lucas, and liked him. He was also frankly tempted by the money. Though he got an Oscar nomination and a huge payday for this (Lucas had offered him 2.25 percent of the gross — about $10 million!), the actor would forever regret doing the film. What rankled him most was the idea that a whole generation would remember him only for this fairly silly part, rather than the earlier roles he was much prouder of.

But there were more great roles to come. Two years after “Star Wars,” Sir Alec (he’d been knighted in 1959) would play John le Carre’s spymaster George Smiley in the miniseries “Tinker, Tailor, Soldier, Spy,” a part he’d then reprise in 1982’s “Smiley’s People.”

In the last decade of his life, Guinness wrote three volumes of memoirs and spent more time with his wife of nearly sixty years, playwright Merula Salaman, and their actor son Matthew, at their home in Hampshire. His enduring marriage had only grown closer when both Alec and Merula converted to the Roman Catholic Church in the late fifties.

Alec Guinness died in 2000 at the age of 86, and Merula followed him just two months later. He will be remembered above all as a superb, subtle craftsman who, for the most part, was happier on-stage than off.

He once described his ideal routine as follows: “Getting to the theater on the early side, usually about seven o'clock, changing into a dressing-gown, applying make-up, having a chat for a few minutes with other actors and then, quite unconsciously, beginning to assume another personality which would stay with me (but mostly tucked inside) until curtain down, was all I required of life. I thought it was bliss.”

We thought so too.

More:  The Endless Wit and Wisdom of John Barrymore

A Tribute to Warren Beatty