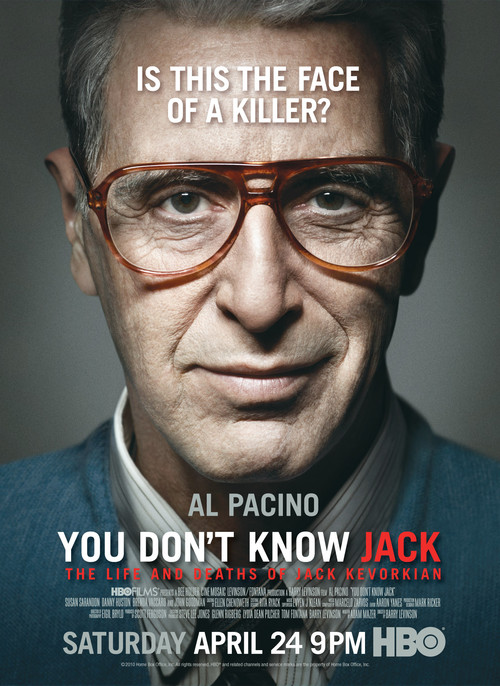 In the 1990s, Dr. Jack Kevorkian (Pacino) became a household name, a controversial figure who was a hero to some but a villain to many. The man known as "Dr. Death" believed that terminal patients have the right to choose their own time of death and invented a mercy machine which he used around the country to end their suffering. "You Dont Know Jack" tracks Kevorkian's media coverage, court battles, and interactions with a host of figures on both sides of the divide. Throughout his ordeal, Jack derives support from his sister Margo (Vaccaro); Janet Good, a national right-to-die activist (Sarandon); and Neal Nicol, a plain speaking medical supply salesman (Goodman). What emerges is an intimate, multi-faceted portrait of one fascinating man who dared to challenge prevailing notions on just how and when to die.

This Emmy-winning film's playful title hints at director Levinson's somewhat unexpected approach to his subject. Rather than allow the seriousness of Dr. Death's divisive actions and demonized public persona to hold complete sway, he wisely balances these sober issues with moments of pronounced humanity and humor, especially in portraying Kevorkian's well-documented eccentricities. Pacino, who actually looks more than a little like the real-life doctor, so completely inhabits the character that his own celebrity becomes invisible (he won himself an Emmy in the process). If you think you know Jack, think again, and watch this film.

You're Gonna Miss Me