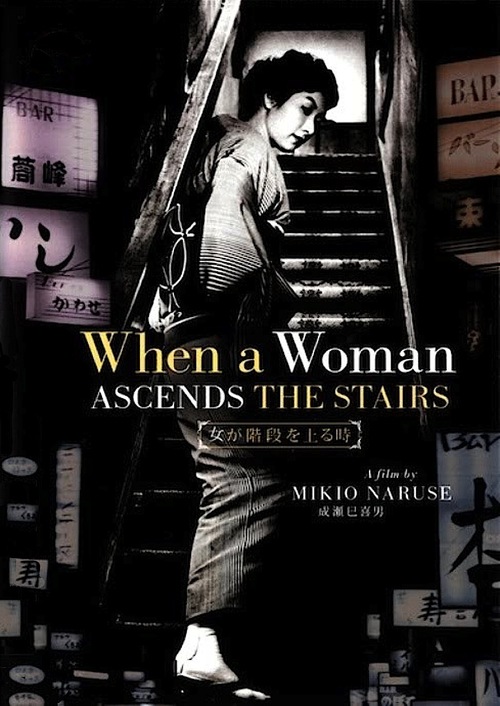 When a Woman Ascends the Stairs

A virtuous and self-composed bar hostess in Tokyo's Ginza district, Keiko (Takamine) works to support her aged mother and floundering brother, but struggles with debt. Nearing 30, Keiko — known to all as "Mama" — must decide whether to risk opening her own bar, or break an oath she made to her dead husband and marry one of her wealthy patrons.

Though not as well known as Ozu or Kurosawa in the West, Naruse is one of Japan's finest directors, and "Stairs" remains one of his most affecting works. Playing a refined woman in an occasionally sleazy after-hours business, Takamine brings just the right mix of elegance and sweet, careworn despondency to the role of Keiko, an expert handler of men who earns the respect of clients like chubby philanderer Sekine (Daisuke Kato), bank official Fujisaki (Masayuki Mori), and businessman Minobe (Eitaro Ozawa). But it's bar manager Komatsu (Nakadai) who secretly pines for the lovely widower, idealizing her to the point of indiscretion. With its plaintive piano theme, recurring image of Keiko's feet ascending to her workplace, and gently unspooling storyline, "Stairs" is a triumph of cool emotion that emphasizes just how lonely people can be.

When the Last Sword Is Drawn