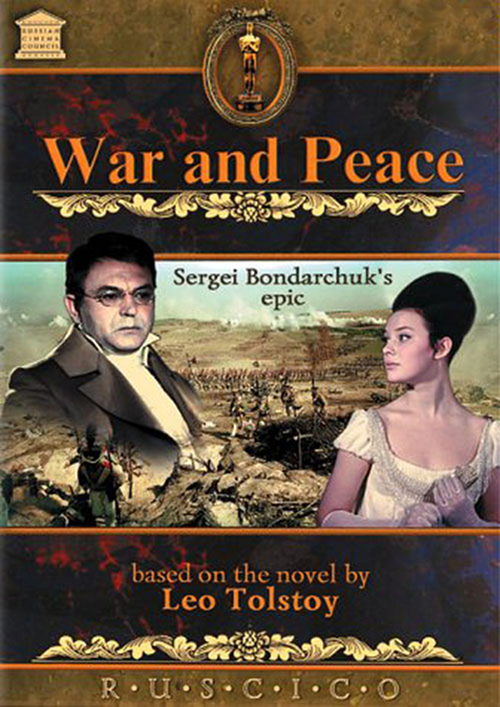 Based on the Tolstoy novel, this acknowledged masterpiece portrays the tumult of early 19th century Russia, as the French army (led by Napoleon Bonaparte) threatens to devour Europe. Leading up to the climactic conflict between the two nations in 1812, we witness the opulence of Russian high society, mainly through the eyes of Pierre Bezhukov (played by director Bondarchuk), a shy, gentle man who comes into a considerable inheritance, then enters into an unhappy marriage. He secretly loves the delicate, ravishing Natasha Rostova (Savelyeva), but she in turn has fallen for Pierre's close friend, Prince Andrei Bolkonsky (Tikhonov). But with the vagaries of fate, and war on the horizon, will the two ever unite? And will the rich but lonely Pierre find meaning in his own life?

Winner of the Best Foreign Film Oscar, this definitive "War and Peace" took four years to make, and (adjusted for inflation) holds the record for the most costly film ever made. The expense is evident in the breathtaking, meticulous recreations of battle scenes, reportedly employing over 100,000 extras! The spectacle of the Russian aristocracy attending soirees and balls in St. Petersburg is also lavishly recreated. The wonder of it all is how well such a leviathan work translates to the screen, and how Bondarchuk (who also co-wrote the adaptation) manages to interweave the human drama so deftly with the futile war that would transform a country. Truly an awe-inspiring accomplishment, viewers should not be put off by this feature's 6-hour-plus running time. Just watch it in installments. (The widescreen edition from Image Entertainment is recommended; in a rare exception, we also endorse the English version, as the dubbing is first-rate.)

War of the Arrows