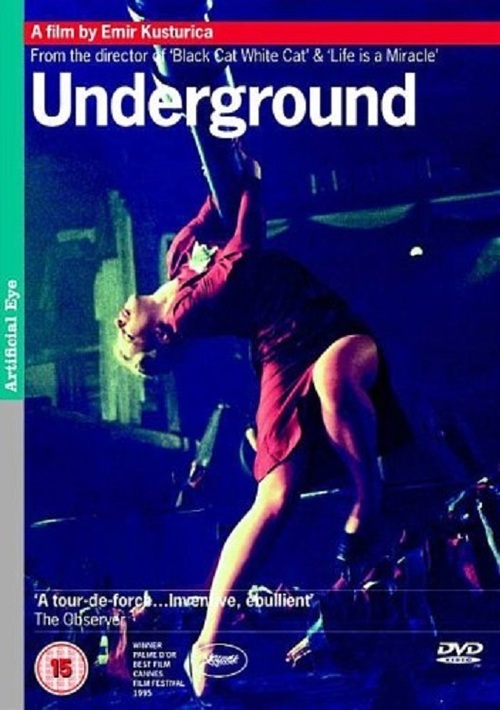 At the outbreak of World War II in Belgrade, irrepressible con men Marko (Manojlovic) and Blacky (Ristovski) hatch a sensible plan: Blacky and his wife will take their arms-manufacturing business underground — literally — while Marko and his own gorgeous partner Natalija (Jokovic) will stay aboveground to sell the goods. But when the war ends, Marko fails to tell Blacky; and as the decades pass, he and the other subterraneans grow suspicious.

This long, often bleak black-comic fantasy tracks the misadventures of two Communist buddies over several decades, from WWII through the Tito years and up to the recent Bosnian war. Kusturica has manufactured an epic allegory that is robust, moving, and quite surreal, especially with his phenomenal Fellini-esque set pieces, which ultimately reflect the moral and political disintegration of Yugoslavia into warring ethnic states. Acclaimed for its technical virtuosity and brilliant critique of war's absurdity, "Underground" is a sprawling, brutally funny epic about romance, betrayal, and the anguish of modern life.