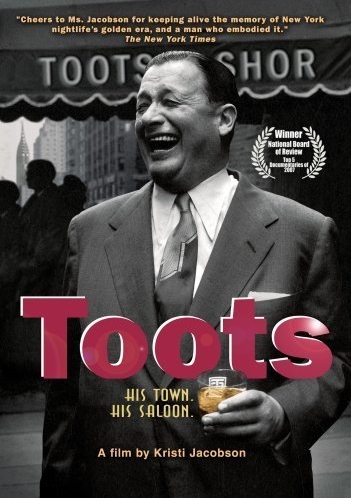 In the swinging Manhattan of the '50s and '60s, the city's glamorous heyday, Toots was the good times, no-frills place to see and be seen. Regular folks had the chance to rub elbows with celebrities at the inviting saloon, as both came in for the chummy atmosphere and $1 drinks, as well as the inimitable, rough-hewn charms of proprietor Toots Shor. Through old photographs and interviews with the likes of Walter Cronkite, Frank Gifford, Pete Hamill, and Mike Wallace, the joyful, controversial Shor is given a portrait worthy of his legend.

An old-fashioned tribute to a charming, quintessentially New York guy, this film not only captures its subject, but also allows the audience to live, breathe, and yearn for a bygone era of American life and leisure. Though filmmaker Kristi Jacobson may be Shor's granddaughter, she avoids the common traps of making a film about the search for family heritage, never refusing to explore Toots's less savory aspects, like a possible relationship with the mob. From its assertive filmmaking to its brassy subject, here is a flavorful portrait that deservedly "Toots" its own horn.