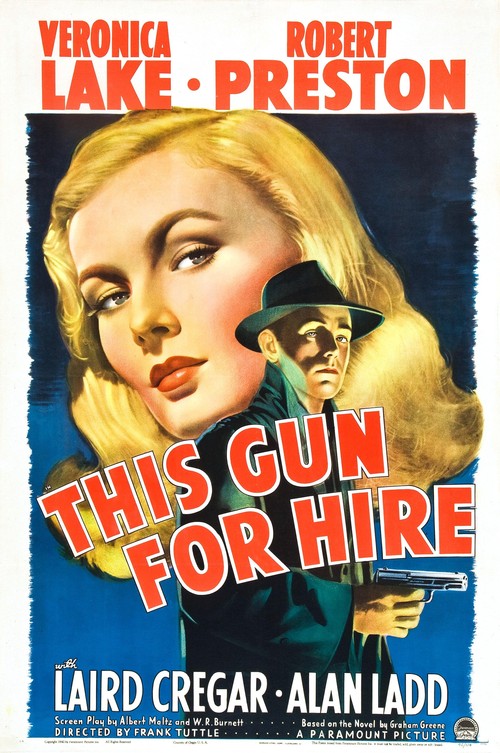 This Gun for Hire

After carrying out a contract killing in a seedy San Francisco hotel room, icy assassin Phillip Raven (Alan Ladd) is betrayed by crooked nightclub owner Willard Gates (Laird Cregar). Meanwhile, Ellen Graham (Veronica Lake), girlfriend of a detective out to nail Gates, takes a job in one of Gates's clubs, while secretly keeping tabs on his illegal work. One night, the singer-turned-spy meets Raven on a train, sparking a relationship that leads to revenge.

Featuring Ladd's breakthrough role as a baby-faced killer, "Gun", adapted from a Graham Greene novel, paired the diminutive actor for the first time with the mysterious, wildly seductive Lake, famous for her peek-a-boo hairstyle. (On the strength of their on-screen chemistry here, the pair would make six more movies together.) "Gun" has all the elements youd expect from a gangster picture: murder, deception, lust, violence, and dark, moody cinematography to match the conspiratorial tone. Rich in atmosphere and with plenty of clipped tough-guy dialogue, you'll understand just why this movie made Ladd and Lake overnight stars.