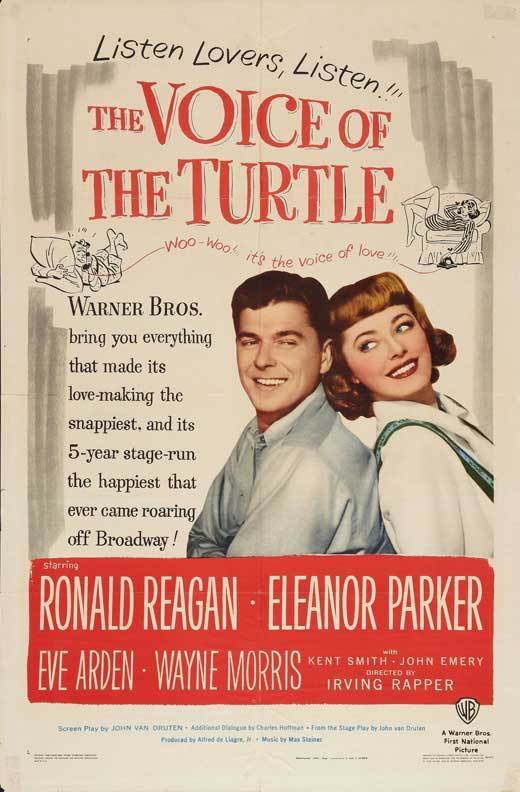 The Voice of the Turtle

Actress Sally Middleton (Parker) has renounced men and love after being let down by celebrated playwright Ken Bartlett (Smith). But when her man-eating best friend Olive (Arden) ditches Sgt. Bill Page (Reagan) in favor of a higher ranking officer, Sally feels obligated to entertain the non-com. With hotel rooms in short supply, Bill innocently sleeps on Sally’s couch, and they spend the whole weekend together. Sally resists her growing attraction for Bill, who can’t hide his own feelings. Realizing she’s passed up a good catch, Olive starts to regret her choice.

Playwright John van Druten (“Gaslight”) adapted his smash Broadway hit for Hollywood, and the film opened while the play was still enjoying a successful run. Toning down some of the more censorable aspects, Rapper’s cinematic version favors innuendo and romantic suggestion. Reagan is at his warmest and most natural as the wholesome G.I., but Parker steals the show with her deft comic touch. Meanwhile, Arden is wickedly subversive as her single-minded pal. Director Rapper (“Now, Voyager”) exploits the evident chemistry between Reagan and Parker, and keeps things moving at a lively pace. This underappreciated romantic comedy is a diverting treat, and it’s great to see our former President in such fine form!

The Wages of Fear