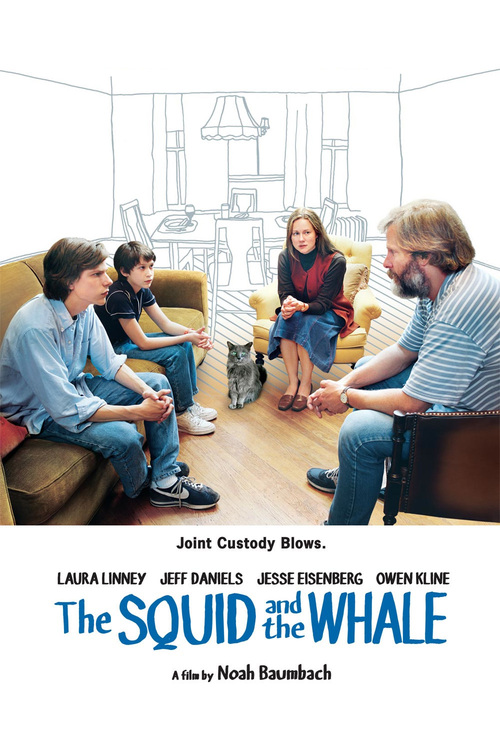 The Squid and the Whale

Struggling, self-important Brooklyn novelist Bernard (Daniels) is treading water on the teaching treadmill and seemingly unable to get his latest manuscript accepted, while his chipper, newly confident wife, Joan (Linney), has just published her first book to wide acclaim. This new strain has collapsed their already teetering marriage, and when they announce their separation plans to teenage son Walt (Eisenberg) and 12-year-old Frank (Kline), the boys handle the tension exactly like their bitterly squabbling parents: by acting out.

A piercing, intelligent look at a high-minded, dysfunctional family in 1980s Brooklyn, Baumbach's semi-autobiographical comedy transcends the clichés of the divorce drama for an unflinching portrait of four oddballs mired together in the crazy glue of family. Daniels is a revelation in the role of Bernard, a pretentious windbag who shacks up with a too-young student (Anna Paquin) and lacks the minimum quotient of paternal camaraderie his older son Walt clearly longs for. Linney, meanwhile, gets involved with a hunky, uncomplicated tennis pro (William Baldwin) to the chagrin of punchy pre-teen Frank. Tender and ingratiating one moment, caustic and cynical the next, "Squid" is a small marvel that redefines what's meant by "family film."