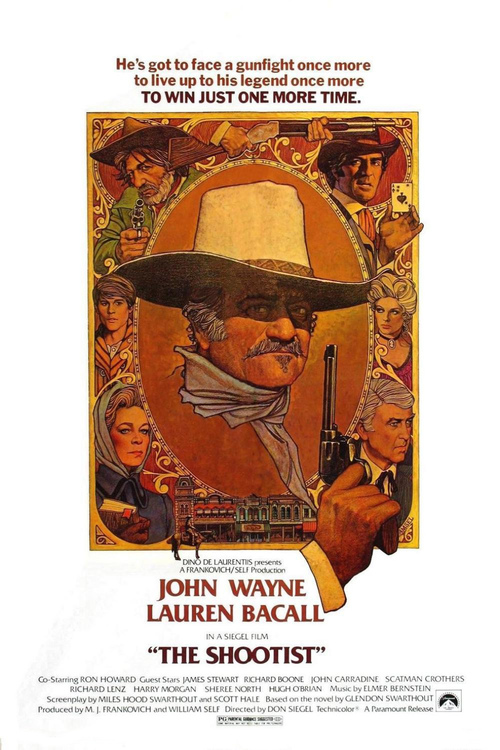 Renowned and feared for his six-shooter prowess and the high body count he’s left in his wake over the years, J.B. Books (Wayne) rolls into Carson City to look up his trusted old friend Doctor Hostetler (Stewart). Unfortunately, the good doctor tells Books he “has a cancer” that will take his life in six weeks. Hoping to end his days quietly, Books rents a room in a boarding house run by widow Bond Rogers (Bacall) and her teenage son, Gillom (Howard), who befriends the gunman. But can an old legend go gently into that good night?

For his last big-screen appearance, the Duke teamed up with “Dirty Harry” director Don Siegel for this elegiac story of a dying gunman who longs for a noble end but must contend with the vultures (Harry Morgan, John Carradine, Richard Boone) who come to feed off his reputation, or just gloat over his demise. Wayne is as ornery and mule-headed as ever playing off Bacall’s disapproving yet sympathetic widow, but shows a sentimental side, too, in his scenes with Gillom. Even clutching a whiskey bottle, young Ron Howard doesn’t do much to make you forget his TV work, but his soured naiveté plays well in the bloody finale. From the opening montage of old Wayne films, you realize you’re watching a film about the end of two careers: a gunfighter’s and a Hollywood actor’s. It’s poignant stuff, and the Duke does it proud.

The Shop Around the Corner