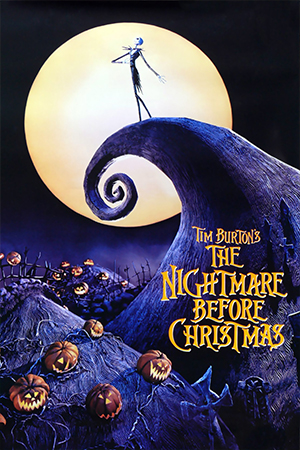 The Nightmare Before Christmas

Bored with scaring humans the same old way year in and year out, Jack Skellington, a.k.a. The Pumpkin King of Halloweentown (Sarandon), stumbles upon the enchanting new realm of Christmastown one day after a fateful walk in the woods. Intrigued by the merriment of this special holiday crowd, and against the wishes of his friend Sally (O'Hara), he hatches a plan to kidnap Santa (Ivory) and mount a ghoulishly fun Yuletide celebration.

Produced by Tim Burton (who also co-wrote the story), Selick's Gothic holiday fantasy blends state-of-the-art stop-motion animation with an imaginative, light-heartedly eerie story about a clever skeleton who decides to reinvent Christmas. Along the way, the jack-o-lantern-headed Jack (amiably voiced by Chris Sarandon) has to square off against his evil nemesis, Oogie Boogie (Ken Page), who has sinister plans of his own. With Danny Elfman's frightfully jolly score and a bright script based on characters Burton created, this is a "Nightmare" the whole family will enjoy (though smaller fry might get spooked at times).