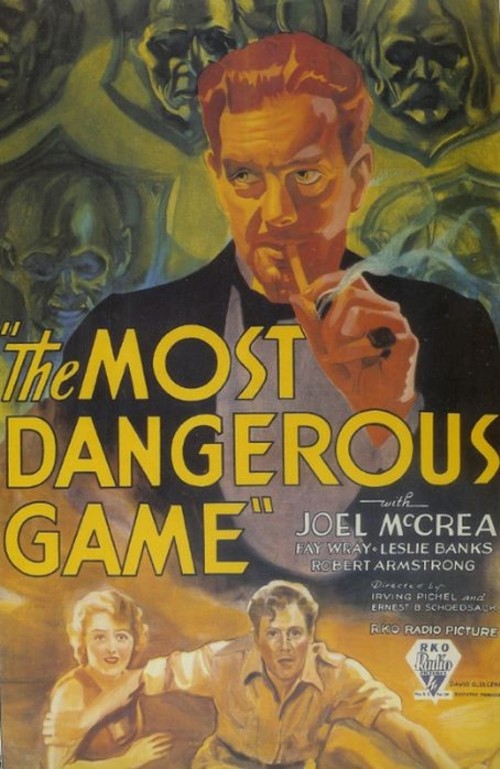 The Most Dangerous Game

Washed up on a remote island, shipwreck survivor Bob Rainsford (McCrea) stumbles upon a jungle fortress inhabited by Zarloff (Banks), a creepy Russian count with a passion for big-game hunting. Among his "guests" are two other wreck victims, Eve Trowbridge (Wray) and her brother, Martin (Armstrong). Zarloff is hospitable, but drops mysterious hints that he's found renewed vigor in hunting an exotic, novel kind of game. Then Martin disappears, and we discover Zarloff's sick little secret.

Made by RKO during Willis O'Brien's simultaneous production of "King Kong," and utilizing much of the same cast, crew, and sets, this thrilling adaptation of Richard S. Connell's short story about a man who waylays seafarers and then hunts them for sport wowed audiences in 1932. McCrea, playing a professional hunter journeying to Brazil when his ship strikes a reef, is suitably rugged, especially in a breathtaking, cliff-edge fight with one of the Count's vicious hounds. But Wray's woman-in-distress (honing her scream for "Kong," no doubt!) and Banks's slightly campy yet menacing count really drive the picture. Fabulous sets, cogent direction, and a diabolical concept all make this "Game" a visceral pleasure. Imitated many times, but never with as much vigor.

The Most Dangerous Man in America: Daniel Ellsberg and the Pentagon Papers