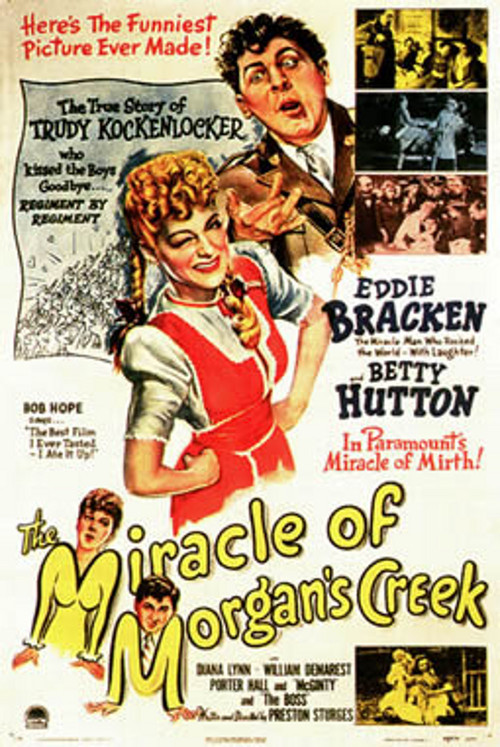 The Miracle of Morgan's Creek

On the domestic front during the Second World War, we meet one Trudy Kockenlocker (Hutton), a proper young lady who one night has too much fun entertaining troops on leave. She wakes up the next morning with a wedding ring on her finger, but no recollection of getting married. Soon it appears she's also with child! Knowing the explosive temper of her dad, town constable Kockenlocker (Demarest), Trudy knows she'd better get married quick, and calls on befuddled childhood friend Norval Jones (Bracken) to be the groom. But does poor Norval realize all he's in for?

Preston Sturges's divinely goofy comedy is extremely broad, but still clicks, thanks to a bizarre, surprisingly risque premise only this director could concoct, and a kooky cast only he could assemble. Hutton and Bracken are mutually over-the-top as Trudy and Norval, creating a frantic comic rhythm all their own, but Demarest steals it as Trudy's volatile Dad ("Daughters!"). Love it or not, you'll never see anything quite like it!