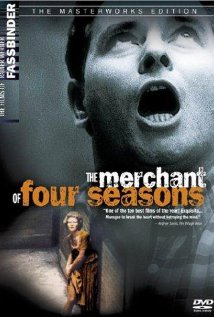 The Merchant of Four Seasons

Hen-pecked by his unhappy wife and disdained by his mother-in-law, fruit vendor Hans Epp (Hirschmuller) is a man whose empty, loveless existence drives him to drink excessively. When he encounters Harry (Lowitsch), an old friend from the Foreign Legion who once saved his life, Hans offers him a job, and soon sees an uptick in his business. But behind the scenes, Harry is quietly poaching Hans’s wife and home.

One of our favorite titles by the genius avatar of New German Cinema, “Seasons” is a sour drama about a man’s dispiriting fall from middle-class respectability (at least in the eyes of his beastly family) into disgrace and near ruin. Hirschmuller is brilliant as the morose fruit seller whose plaintive cries and hangdog look (especially at ex-mistress Caven) is the film’s emotional anchor. Fassbinder, who appears in the film as Hans’s friend Zucker, paints not so much the tragedy of a failed man, but the catastrophe of a person hobbled by the petty cruelties of those nearest him.