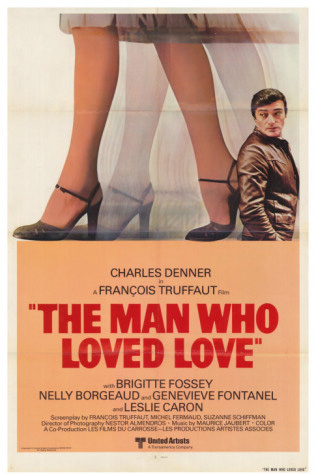 The Man Who Loved Women

A self-described "skirt chaser," middle-aged lab technician Bertrand Morane (Denner) simply can't keep his eyes off the fairer sex. A mere glimpse of a gorgeous woman crossing her legs or striding past on the sidewalk, and Bertrand is off and running after her, with surprisingly successful results. His dalliances with a bevy of gals, all of whom he adores, inspires him to begin writing a memoir of his exploits, revealing more about himself than he at first realizes.

Truffaut's pseudo-autobiographical romantic comedy concerns a man who, at least outwardly, has no particularly exceptional qualities; and yet his persistence, frankness, and attentiveness to the physical attributes of the various women he encounters (played by Brigitte Fossey, Natalie Baye, and Nelly Borgeaud) result in his becoming a rather roguish ladies man. Denner — unsmiling, helplessly leering, yet somehow charming — was a perfect choice for the role, and there's a lot more to the story than conquest. As Bertrand writes about his life, he finds dissatisfaction at the heart of his enterprise; a revelation Truffaut turns into bittersweet irony. For a witty take on the frustrations of love, hang with "The Man Who Loved Women."

The Man Who Planted Trees