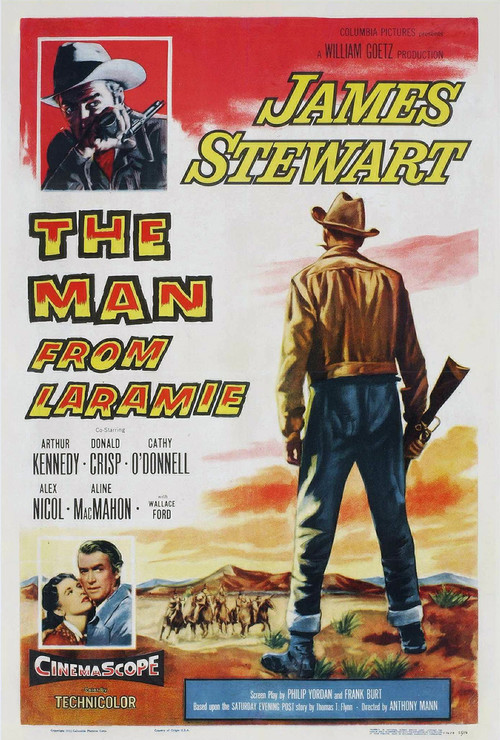 The Man from Laramie

Laramie native Will Lockhart (Stewart) rolls into Coronado, N.M., with a wagon train of goods he aims to deliver, but his real motive is to find the person responsible for selling rifles to the Apaches who killed his brother. Lockhart soon learns the town is part of a vast empire owned by Alec Waggoman (Crisp), an aging patriarch trying to decide whether to leave his vast holdings to Vic (Kennedy), his right-hand man, or his only son Dave (Nicol), a dangerously unhinged cretin. Lockhart’s dust-up with Dave soon puts him into conflict with the Waggomans and town authorities.

Anthony Mann’s first picture in CinemaScope was also his last with frequent collaborator Jimmy Stewart, terrifically gritty here playing a former Army captain with a chip on his shoulder who becomes embroiled in a family’s Shakespearean conflict. Shot on location in New Mexico desert, “Laramie” has a stark visual flair to match its tough cattlemen (Kennedy is great as Waggoman’s cunning second in charge) and dark psychological themes of vengeance and greed. Saddle up!

The Man in the Gray Flannel Suit