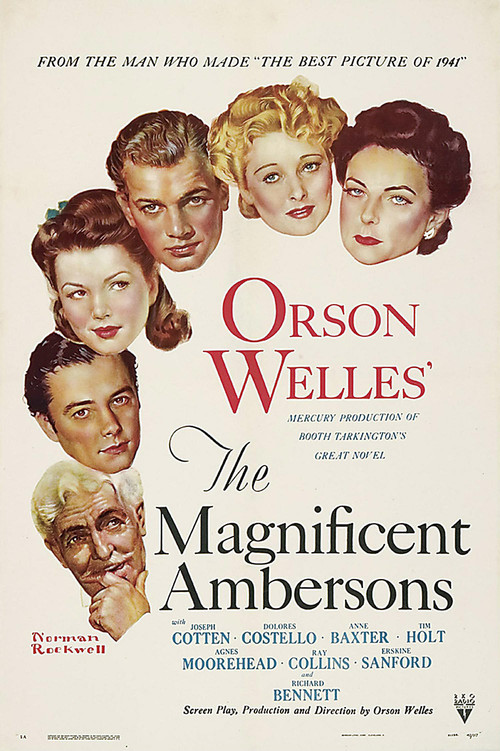 The romantic and economic travails of a prominent Midwestern family are recounted against the backdrop of rising industrialism at the dawn of the 20th century. Widower Eugene Morgan (Cotten), now a successful inventor of the new horseless carriage, returns to his hometown with his daughter (Baxter) and reconnects with Amberson heiress Isabel (Costello), his first love from years before. When Isabel's husband dies, after a suitable period, Eugene begins courting her in earnest. Their relationship provokes social gossip and the ire of Isabel's spoiled, idle son George (Holt), as well as the jealousy of his spinster Aunt Fanny (Moorehead), who'd always secretly held a candle for Eugene.

One year after "Citizen Kane," director Welles adapted Booth Tarkington's 1918 novel and directed a stellar cast in another timeless classic, proving that he was more than just a one-shot wonder. "Ambersons" is as visually stunning as its predecessor, with gorgeous deep-focus photography and inventive camerawork by cinematographer Stanley Cortez. Also of note: an unusual end credits sequence voiced over by Welles himself; as well as a walk-and-talk scene where the camera follows the actors through several floors of the Amberson house. Despite a large chunk of that scene and several others being lost after RKO re-edited the film against Welles' wishes, this film merits its four Oscar nods... and your attention.