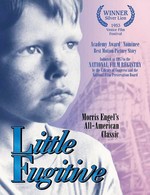 With his Mother gone overnight to visit a sick relative, twelve year old Lennie (Brewster) is entrusted to look after his seven year old brother Joey (Andrusco). Instead, goaded by his friends, Lennie plays a practical joke on Joey which makes the younger boy believe he's killed his brother, and needs to take it on the lam. So, where does Joey escape to with the little money their Mother left? Coney Island, of course, where he discovers a fantasy-land. Once Lenny realizes his trick worked too well, he must track Joey down before Mom gets home. But where to begin?

This sublime, touching little film became a landmark in independent filmmaking, winning the Silver Lion Award at Cannes, and influencing what would become the French New Wave with its documentary-like immediacy. Seen today, "Fugitive" evokes a potent nostalgia for the long-ago '50s with the fabled Coney Island beach and amusement park captured (from a kid-size view) in its prime, with all its wonder intact. Appealing non-actor Andrusco is also transfixing as Joey, our little protagonist. This "Little Fugitive" is definitely worth tracking down.

The Little Girl Who Lives Down the Lane