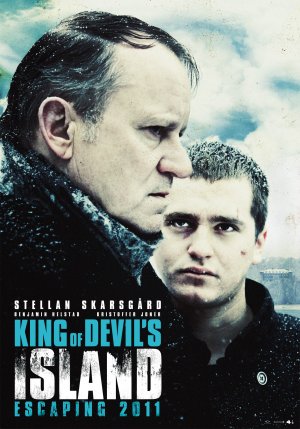 The King of Devil's Island

In Norway circa 1915, wayward boys are sent to a reform school on the remote island of Bastoy, where living and working conditions are harsh. Boys as young as eleven are punished for trivial crimes and sentenced to years of hard labor. Governor Bestyreren (Skarsgard) oversees the school but is blind to some of the cruelties that go on, especially at the hands of housemaster Brathen (Joner). A new boy named Erling (Helstad) arrives, and his rebellious spirit inspires the inmates to take matters into their own hands.

Bring a sweater to watch this frigid thriller, as your bones will be chilled by the starkly beautiful photography and clouds of cold breath coming off the screen. Holst, working from a true story, directs with a clear-eyed rigor; his characters steadily come into focus in this involving tale of captivity, abuse and escape. Young Helstad's powerful screen presence serves the story well, as Erling changes from a selfish loner into a symbol of comradeship. Skarsgard is equally strong as a likeable character whose heinous weaknesses are gradually revealed. For powerful drama and suspense, visit this "Island."

The King of Kings