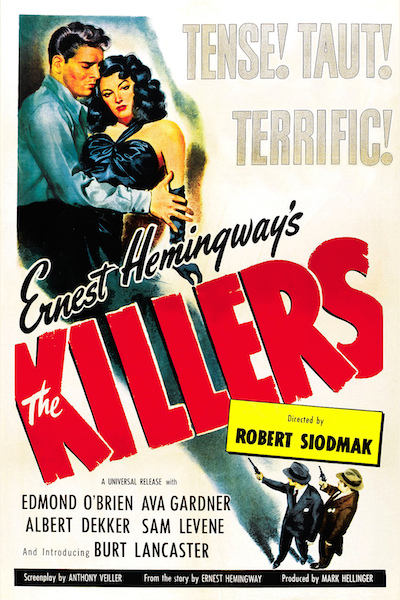 Two hit men (Conrad and McGraw) stroll into a diner announcing their plans to kill local gas pump attendant Ole Anderson, aka the Swede (Lancaster).  A colleague rushes to warn him, but the Swede, an ex-boxer, does nothing to save his skin and is subsequently gunned down in his room.  An investigator Reardon (O’Brien) looking into the Swede’s life insurance policy uncovers a web of double-crossing intrigue as he is led to childhood friend-turned-cop Lubinsky (Levene), a mysterious femme fatale Kitty Collins (Gardner) and a mob heavy named Big Jim Colfax (Dekker).  Just why didn’t this former pugilist put up a stronger fight in the end?

French critic Nino Frank coined the term “film noir” in 1946 just in time for this hard-boiled crime thriller from German born director Siodmak.  With a script attributed to Anthony Veiller, but with uncredited work from John Huston, “The Killers” uses Ernest Hemingway’s eponymous short story as a kick-off point. Whereas his story ends with the death of the Swede, the film probes into the mystery of his killing, with flashbacks filling in the gaps. It was Lancaster’s first film, and with his raw masculinity jumping off the screen, it’s plain to see why he became a star. Gardner, struggling in minor roles at that point, also saw her career soar after playing the smoldering, two-timing Kitty. Familiar faces fill out the cast (Conrad would go on to star in TV’s “Cannon”). The moody cinematography, archetypical characters and brooding fatalism make this a sterling example of 1940s film noir.