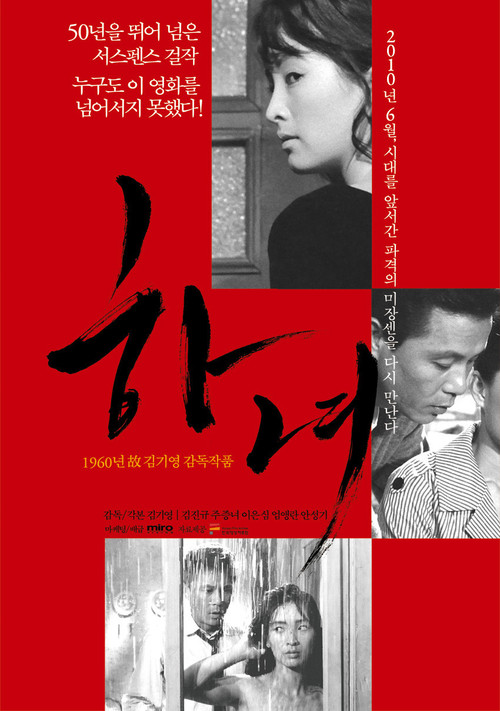 On the surface, it would seem that handsome music teacher Dong-sik (Kim Jin-kyu) has the ideal life, with a solid job, adoring kids, and a beautiful, pregnant wife (Ju Jeung-ryu). In reality, however, he is coming undone from the stress of maintaining his household, the arrival of a third child, and his wife’s insistence on moving into a bigger home. Also, some unwelcome advances by a female student has led to increased tensions at work. When he decides to hire one of his young music students (Lee Eun-shim) to help with the chores, he’s tragically unaware of her mental instability, or her capacity for seduction and revenge. Soon the cunning housemaid pulls at the loose threads in this seemingly happy family’s life until it all unravels.

Not to be confused with the 2010 remake, this first “Housemaid,” often considered one of the best Korean films ever made, was only recently restored and re-mastered for DVD. At first its highly dramatic performances may seem a bit over-the-top, but their effect is surprisingly haunting when combined with the film’s clean, stark visuals and slow-burn style of storytelling. Ultimately, this landmark classic remains a consistently chilling and often harrowing depiction of materialism, social hierarchy, and disillusionment that modern viewers should find universally relatable. If you want to clean up with a great movie, hire this “Maid”!