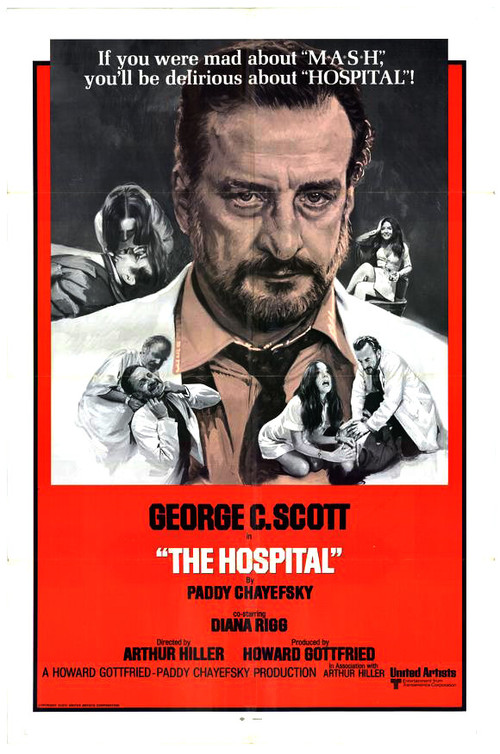 Herbert Block (Scott), the harried chief of medicine at a big city hospital, is divorced, impotent, estranged from his children, and thinking seriously about ending it all. When patients start dying mysteriously on his watch, he suspects foul play. Indeed the whole hospital seems to be on life support. Complicating matters, the alluring but eccentric free spirit Barbara Drummond (Rigg) confronts Block, demanding to collect her ill father (Hughes) and take him away to heal in healthier environs. As the world around them careens out of control, this unlikely pair fall fast in love (or is it lust?), and the good doctor considers leaving medicine behind forever.

"The Hospital" recalls that long-ago time in Hollywood when screenwriters could be clever, funny literates like Paddy Chayefsky, and actors gruff, imperfect specimens of complicated manhood like George C. Scott. Chayefsky deservedly won the Screenplay Oscar for his biting, satirical script, and Scott also got nominated for his expert handling of an extremely demanding role. In particular, his characters mid-film monologue on the state of his life sears the screen. Don't miss this outstanding, jet-black satire on the malaise afflicting our modern, supposedly civilized society.