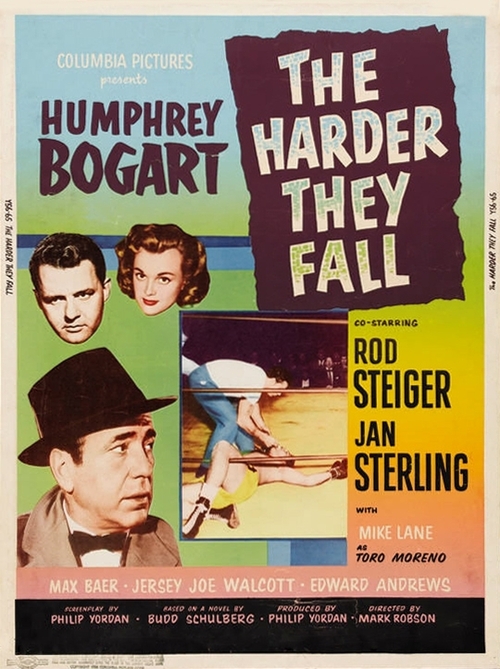 The Harder They Fall

Cynical, out-of-work sports columnist Eddie Willis (Bogart) needs money, so he agrees to build up the reputation of a no-talent Argentinean giant (Lane) flown into the country by crooked fight promoter Nick Benko (Steiger), dubbing him the "Wild Man of the Andes." But the deeper Eddie gets into the exploitative world of thrown fights and manipulated bruisers, the harder it is for him to square his self-respect with the brutal reality of the fight racket.

An ailing Bogart made his final appearance in Mark Robson's raw, hard-hitting film about corruption in the boxing world, playing a jaded press agent with a biting conscience. Steiger is in top form playing the ferocious ringleader of fraudulent bettors, and Mike Lane, as dim-witted, cruelly manipulated boxer Toro Moreno (modeled after Primo Carnero) is poignant and credible. Adapted from Budd Schulberg's novel, "Fall" spares nothing in portraying the unquenchable greed of local promoters, the rabidity of fans, and the heartbreaking physical toll the sport takes on the bodies of men who are barely regarded as human.