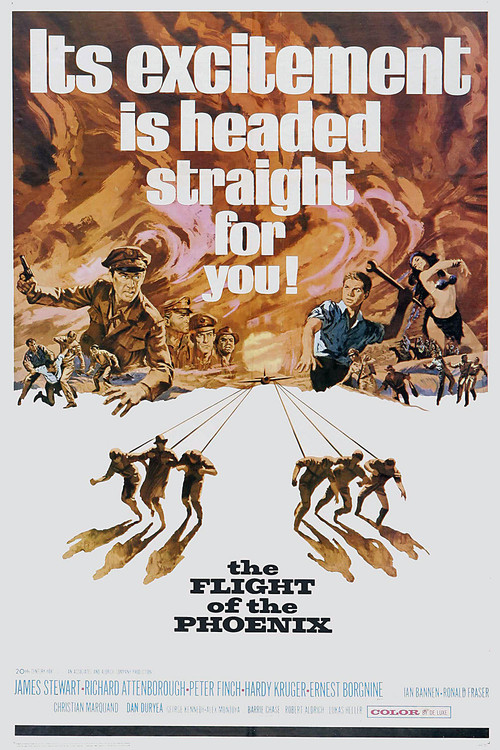 The Flight of the Phoenix

After their plane crashes in the Sahara desert, grizzled veteran pilot Frank Towns (Stewart) and alcoholic navigator Lew Moran (Attenborough) attempt to establish order among a volatile group of male passengers, including British officer Capt. Harris (Finch) and addled mental case Trucker Cobb (Borgnine), while scrambling for a way to flag down help. All seems lost until arrogant German engineer Heinrich (Kruger) reveals an audacious plan for building a new aircraft from the wreckage.

Robert Aldrich's gritty, gripping "Phoenix" pits Stewart's irascible, old-school aviator against Kruger's smug, ultra-rational scientist, a tense war of wills that anchors Lukas Heller's intelligent storyline. Addressing issues of cowardice and bravery, as well as the antagonisms that divide civilization from the rule of anarchy, Aldrich gets a lot of mileage out of the scorching setting. A top-notch supporting cast (Attenborough, Finch, Borgnine, Duryea) also helps. For a manly take on desperation, hope, and survival, take to the skies with "Flight Of The Phoenix."