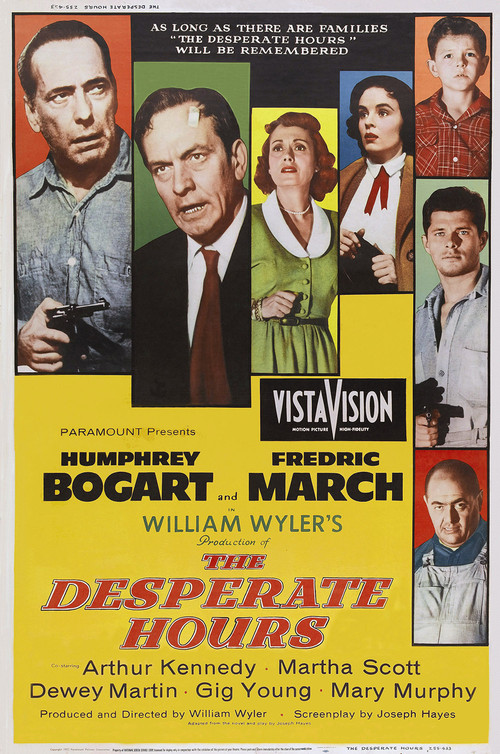 Three escaped convicts led by Glenn Griffin (Bogart) hold a family hostage in their middle-class suburban home, urging them to go about their normal routine so as not to arouse suspicion. Griffin is waiting for his girlfriend to deposit getaway cash in a local bank, but when she does, policeman Jesse Bard (Kennedy) begins to close in with his men. Meanwhile, dad Dan Hilliard (March) is hatching a more subtle plan of his own to foil the home invaders.

Based on an actual incident, Wyler's nail-biting, hard-boiled thriller was adapted from his own novel by John Hayes, who keeps the dialogue and scene-to-scene transitions sharpened to a point. But it's the acting that makes "Hours" so memorable: Kennedy, March, Martha Scott (as the mother) and Dewey Martin (as Glenn's kid brother) are all superb, and Bogie is at his villainous best as Griffin, a desperate man driven to increasingly desperate measures. Wyler wanted the audience to feel anxious; will the arrival of the cops help or imperil the Hilliards? That's the squeaky hinge on which this nerve-wracking domestic-terror film swings.

The Devil Came on Horseback