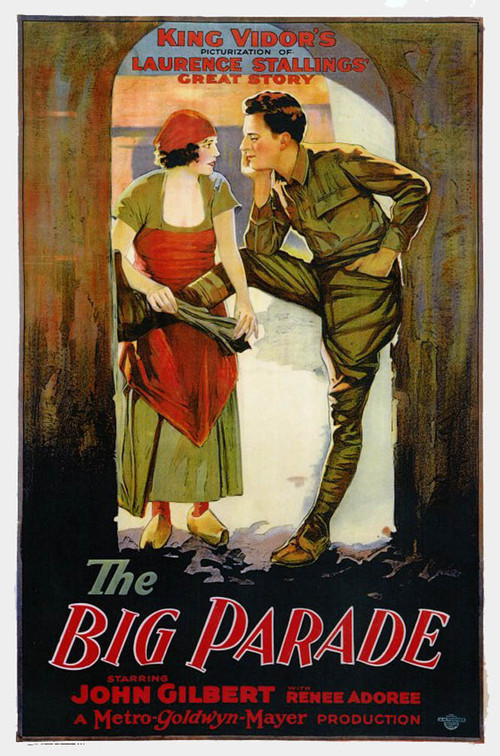 Jim (Gilbert) is the idle son of a rich businessman. When America enters the first World War in 1917, he joins up and is shipped off to Northern France. He makes friends with Bull (O’Brien), a bartender in civilian life, and Slim (Dane), a former construction worker. While billeted in a small village, he falls in love with local beauty Melisande (Adoree). But Jim and his regiment soon get sent to the front where he endures the horrors of trench warfare. Wounded, he returns to America, but can’t forget the French girl who won his heart.

This influential silent epic was the first major picture that director Vidor made for Irving Thalberg at MGM. Massively popular, it played for two years and became MGM’s highest grossing film of the silent era. It was among the first films to portray war in a realistic fashion. Gilbert judged it one of his personal favorites, and certainly his character’s transition from rich doughboy to hardened war veteran is convincing. Adoree is also superb as the french lass Jim falls for. Vidor splits the film between an almost bucolic first half, filled with comic moments among the soldiers and a tentative romance with Melisande; then the second half, with its “big parade” of vehicles advancing to the front lines, introduces battle scenes of unparalleled authenticity and brutality (for the time). Masterful and poetic, “Parade” remains one of the greatest war films of all time.

The Big Red One: The Reconstruction