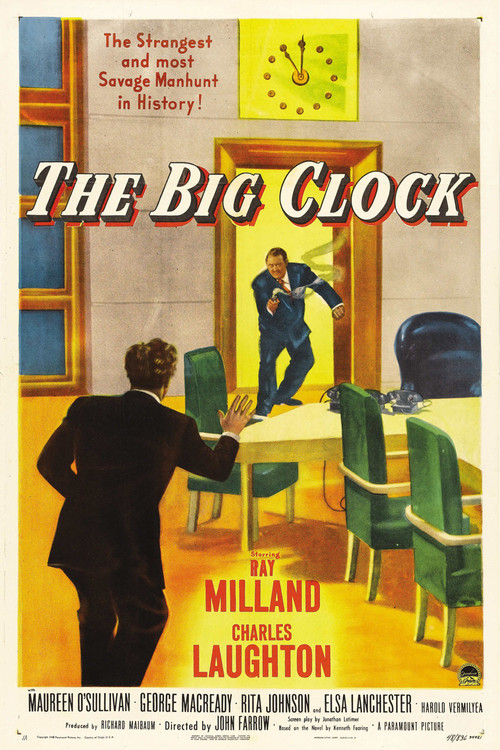 George Stroud (Milland), editor of "Crimeways" magazine, works for effete, clock-worshipping publishing magnate Earl Janoth (Laughton), an unpleasant man who for years has denied Stroud a vacation with his wife (O'Sullivan). One night, in a fit of rage, Janoth murders his mistress. Hoping to pin the crime on an unknown man she was seen with earlier, Janoth asks Stroud to launch a private manhunt, ostensibly to get a big scoop-unaware that his star editor was the woman's drinking companion.

Memorable for its edgy dialogue and tense, sinister atmosphere, director Farrow's 1948 adaptation of Kenneth Fearing's novel boasts an ingenious plot device: two characters, one guilty and one innocent, both attempt to "solve" a crime in which they are circumstantially implicated. Milland, solid as ever, anchors the action as the cornered protagonist, while the portly Laughton is sly and superbly loathsome as the controlling, megalomaniac killer. "Clock" also features fine support from an alluring O'Sullivan (then Farrow's wife), Elsa Lanchester (Laughton's wife), and Harry Morgan, who's chilling as Janoth's mute, gun-toting bodyguard. Incidentally, this smart, inventive thriller was re-made in 1987 as "No Way Out," with Kevin Costner and Gene Hackman.