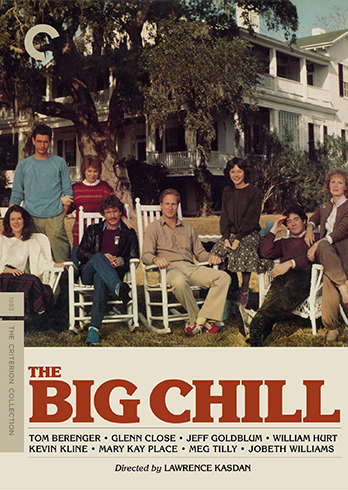 After the funeral of their mutual friend Alex, seven University of Michigan thirty-somethings come together at the South Carolina home of Harold (Kline) and Sarah (Close): Sam (Berenger) is a successful TV actor living in L.A.; Michael (Goldblum) is a self-obsessed tabloid journalist; Nick (Hurt) is a drug dealer; Meg (Place) is single, but desperately wants to be a mother; and Karen (Williams) is unhappy in her marriage, and still harbors feelings for Sam.  Fueled by grief, nostalgia and good music, these friends and lovers discuss the vicissitudes of life and rue lost time.

Kick-starting the commercialization of hip, compilation soundtracks, this baby-boomer time capsule unfolds to the sounds of The Rolling Stones, Marvin Gaye, and The Temptations. Kasdan uses music as a touchstone for old pals now leading separate lives who convene to mourn their late cohort and reminisce about their idealistic college days. Kasdan’s dialogue is snappy, smart, and hits home. Kevin Costner, who played Alex, was famously cut from the film, leaving us to wonder about the eighth and perhaps brightest member of the gang. Nominated for three Oscars, this bittersweet comedy might just be what you need. It’s anything but chilly!