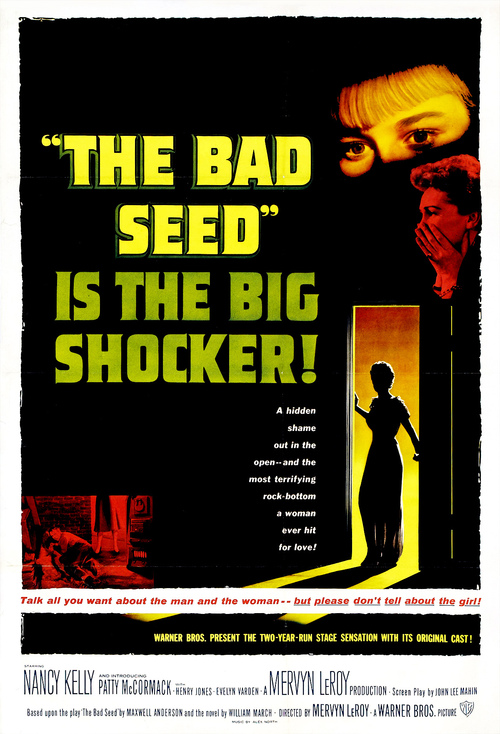 Cutesy, pigtailed grade-schooler Rhoda Penmark (McCormack) seems a model child, unfailingly polite and almost too willing to please her parents, the often absent army Colonel Kenneth Penmark (Hopper) and the isolated Christine (Kelly), whose suspicions about her daughter's true nature gradually develop as the film unfolds. After the accidental drowning of Rhoda's classmate, a boy who won a penmanship award Rhoda coveted, to her mounting horror, Christine begins to believe that her daughter may be a cold-blooded killer.

LeRoy's divinely campy classic about a psychopathic child with a suspiciously sweet veneer was adapted from Maxwell Anderson's Broadway play, also starring Kelly and McCormack. When Christine discovers a long-buried secret about her own biological family just as another "accidental" death clouds their home once again, the plot takes a chilling twist. McCormack is one of the eeriest evil dolls you'll see, and Eileen Heckart, playing the mother of Rhoda's first victim, delivers an extraordinary, Oscar-nominated performance. Despite a silly tacked-on ending dictated by sponsors of the day, "The Bad Seed" remains a highly distinctive, creepy little thriller about a very badly misbehaved child. Classic dialogue between Rhoda and her dad: "What will you give me for a basket of hugs?" "A basket of kisses!" Yikes!