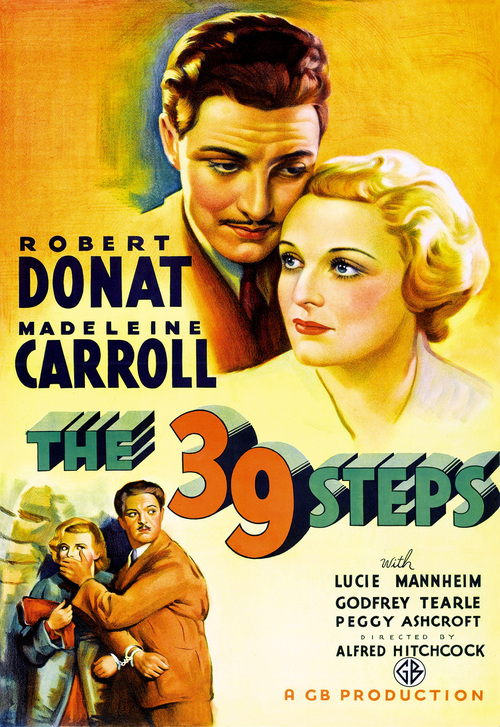 After a brief disturbance at a vaudeville show he attends in London, Richard Hannay (Donat) is leaving, when a shaken young woman approaches, asking for his protection. Back at his flat, she tells him she's a British agent trying to prevent a spy ring from shipping a top-secret formula out of the country. When she ends up dead shortly after, suddenly everybody is after Richard — the authorities, who think he's the killer, and the spies, who want him silenced. Armed with few clues, Hannay goes on the run to clear himself. He soon meets Pamela (Carroll), a skeptical beauty who doesn't buy Richard's story and turns him in. Once he escapes from the police, however, fate decrees Richard and Pamela will meet again, and together solve the mystery of "The 39 Steps."

An early classic from the Master, "Steps" is fast, gripping, and clever, with priceless chemistry and repartee between the two charismatic young stars. Hitchcock's most successful film to-date, “Steps” also inaugurated the “innocent man on the run” theme he'd employ again, most memorably a quarter century later in "North By Northwest." "Steps" itself was re-made twice, but trust us — the original towers above the rest. That riveting climactic scene in the vaudeville theatre (where all the fuss began) is justly famous. Don't miss this gem: it's pure, prime Hitchcock.