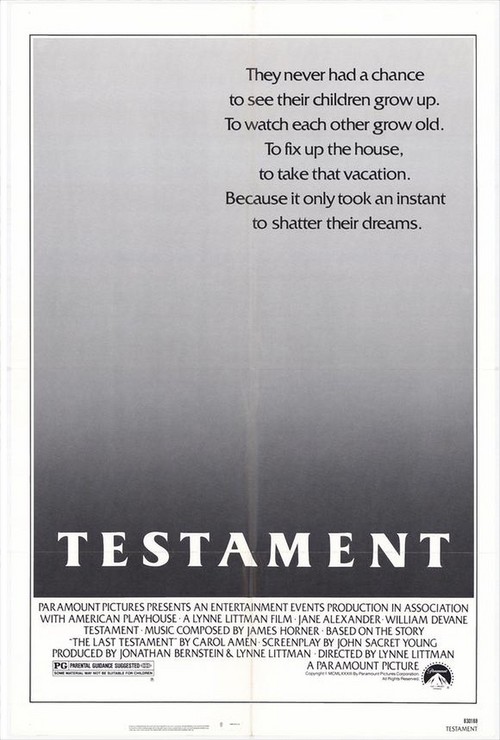 Carol Weatherly (Alexander) and her family are experiencing another innocuous day in their small hamlet outside of San Francisco when, all of a sudden, their televisions, radios and phones die. The townsfolk soon learn that the cause is the long-feared initiation of nuclear war between the United States and the U.S.S.R. Even though their town is not actually destroyed by the bombs, the inhabitants can't escape the encroaching radiation. "Testament" tracks how a small band of neighbors join together to care and comfort each other as they wait out their inevitable end.

Heartbreaking and powerful, and anchored by a searing, Oscar-nominated turn by Jane Alexander, "Testament" remains one of the finest films to emerge from the nuclear scare era. Perhaps director Littman's own background in documentaries accounts for this narrative feature's stark, terrifying realism. Instead of the overblown dramatics and hysteria of most disaster movies, this superb, made-for-TV film is chilling in its quiet, matter-of-fact storytelling. Director Littman shows how regular people likely would live in the wake of such a catastrophe, focusing in on little, unexpected moments to create empathy for the human race, even as it confronts its own self-engineered downfall. Watch "Testament" and discover how the ultimate "What if?" scenario plays out.