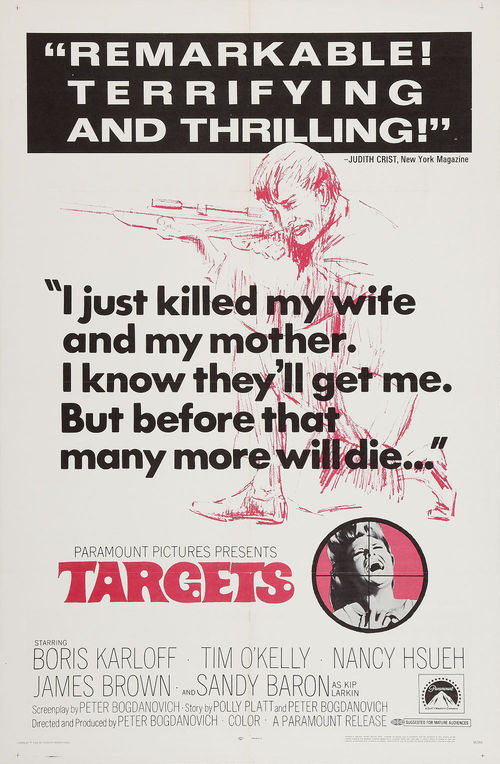 Feeling that he has become an "anachronism," aging horror-movie actor Byron Orlok (Karloff) contemplates retiring to his home in England, despite the entreaties of young filmmaker Sammy Michaels (Bogdanovich). Meanwhile, disturbed young gun fanatic Tim O'Kelly (Thompson) is about to go on a deadly killing spree. Neither man realizes that their paths will soon cross at a drive-in theater where Orlok is scheduled to make an appearance.

Financed by Roger Corman, who lent real-life aging horror star Karloff to newcomer Bogdanovich for two days, "Targets" is a compelling thriller loosely based on Charles Whitman's 1966 murder spree at the University of Texas. Karloff, essentially playing himself, is marvelous in one of his last screen appearances, and Bogdanovich expertly juxtaposes cinematic and real-life horror, resolving the tension in an unforgettable finale that unfolds before a giant screen image. Shelved by Paramount, who felt the movie would not play well in the wake of the King and Kennedy assassinations, "Targets" was a brilliant debut for the future helmer of "The Last Picture Show."