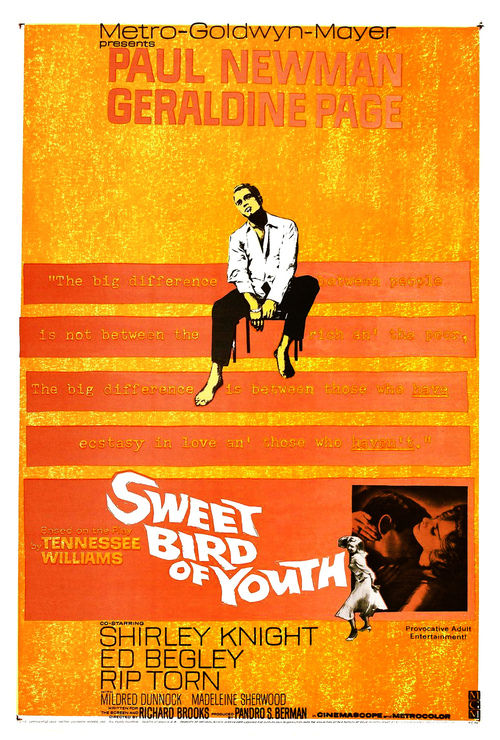 Handsome hustler Chance Wayne (Newman) returns to his small Southern hometown with an aging, alcoholic Hollywood icon, Alexandra Del Lago (Page), whom he's seduced in hopes of becoming a screen actor. Chance longs to see his former sweetheart, Heavenly (Knight), but is thwarted by her father, corrupt town politician "Boss" Finley (Begley), and his loutish son Tom Jr. (Torn), who are determined to run Chance out of town.

Dealing with faded looks and broken dreams, all of it stewing in a cauldron of ugly family conflict, "Bird" is as much about the cruel rotisserie of Hollywood fame as it is a dark observation of damaged relationships. Newman is virile and intense as loner-loser Chance, while Oscar-winner Begley and Torn each turn in solid performances as Knights menacing, vengeful male kin. The other true star of the film is Page, a real-life fading beauty whose boozy, down-and-out Alexandra epitomizes the kind of exaggerated egomania Williams set out to skewer. Don't let this "Sweet Bird" fly away.