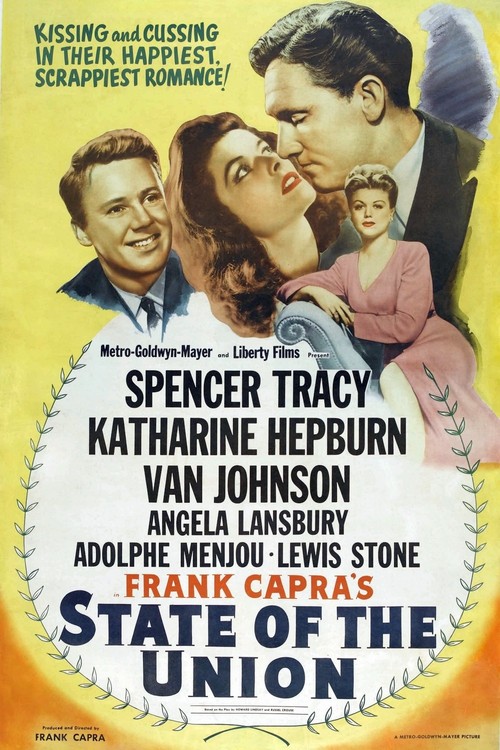 State of the Union

In the midst of a wobbly patch in his marriage to wife Mary (Hepburn), wealthy aviation executive Grant Matthews (Tracy) strays with the alluring, powerful Kay Thorndike (Lansbury), who's inherited her father's string of newspapers and sees in Grant the ideal "dark horse" candidate for President. Once convinced to take the plunge, however, Grant must confront all the double-dealing and dirty compromises that fuel the business of politics. Ultimately, this new reality will force a re-assessment of Grant's whole life, both professional and personal.

Frank Capra, unparalleled purveyor of populist Americana, sets his sights on the smarmy, corrupt practices that get people elected to high office. Though some may focus on its little dated touches, the film's underlying message still manages to sound prophetic. Tracy delivers a perfectly balanced portrayal of a principled man momentarily blinded by the seduction of raw power. While Kate always seems at her best opposite her real-life partner, it's Angela who steals the film as the seductive, ruthless, ice-cold Kay — certainly a long way from "Murder, She Wrote"! A wise-cracking Van Johnson and old veteran Adolphe Menjou round out a top-flight cast playing slick, cynical operators in Grant's camp. In all, a still-relevant tale, imbued with intelligence and heart.