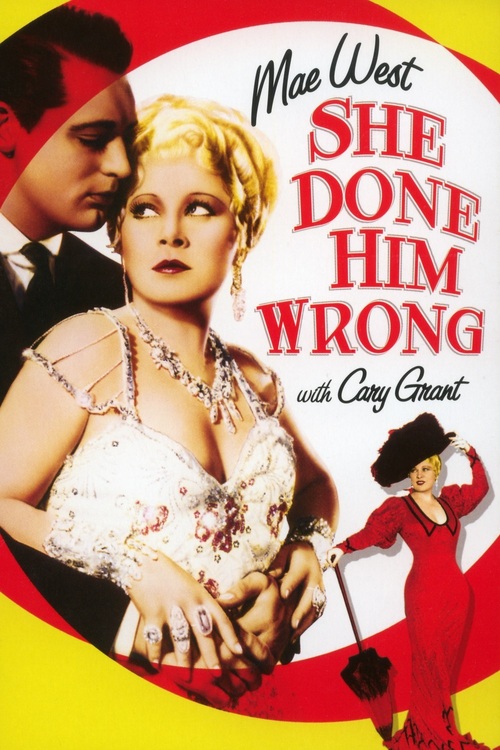 She Done Him Wrong

Sultry, flirtatious nightclub singer Lou (West) is in the employ of Gus Jordan (Beery), an impresario who plies his best gal with diamonds to keep her from falling into the arms of another man (several, actually)... but Lou's previous involvement with jailed crook Chick (Moore) threatens to spoil her game. Meanwhile, handsome patron Captain Cummings (Grant) warns Lou she's headed for heartache, and possibly the Big House, too.

The indomitable Mae West, still the sauciest sex symbol of pre-Code Hollywood, has the raciest lines in this fleet-footed crime comedy, delivering her immortal come-on "Why don't you come up some time, and see me?" to a smitten rake. She also belts out choice numbers like "A Guy What Takes His Time" and "Frankie and Johnny." West's impudent body language and raunchy dialogue was the reason moral scolds cracked down on Hollywood's permissiveness, and it's easy to see why in this film, set in the gay nineties. Grant is effortlessly charming in an early role, playing an undercover cop. But West, surrounded by male admirers and terrific bit players, swishes across the screen like the trashy-flashy Brooklyn dame she undoubtedly was.

She Wore a Yellow Ribbon