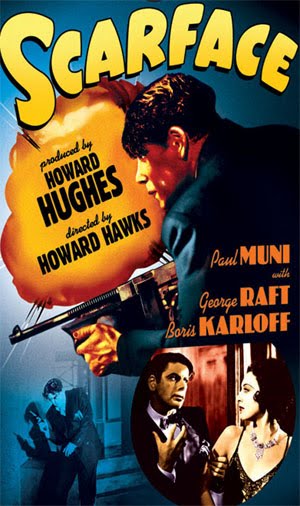 Scarface: The Shame of A Nation

In Prohibition-era Chicago, a power struggle is underway: mobster Tony Camonte (Muni) is charged with killing the reigning mob boss, but manages to beat the rap. Tony is nothing if not ambitious: soon enough he's seized control of the whole bootlegging racket, through sheer cunning and good ol' fashioned homicide. Though his rise is meteoric, we sense Tony's fall may be just as dramatic.

Hawks's film was the most violent America had ever seen (with 30+ on-screen deaths), but the visual energy he brought to the production proved intoxicating, making a big star of Muni, one the meanest criminal maniacs in screen history. Hawks upped the ante in other ways, too, like giving Ann Dvorak a central role as the slinky sis Camonte is perversely jealous of, despite having the sexy Karen Morley on his arm. And George Raft earned himself a studio contract playing Muni's loyal, kill-happy sidekick, Guino. De Palma's tongue-in-cheek remake has its own dirty charms, but Hawks's vicious gangland biopic will never be topped for sheer bravado. Bonus: Boris Karloff as a North Side boss. Don't miss this one!