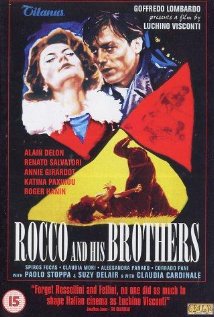 Rocco and His Brothers

This epic film tells of the Parondis, an impoverished family from the Sicilian countryside who come to Milan to seek their fortunes. Exploring the lives of five brothers and their widowed mother over 12 years, and told in episodic fashion, the focus largely stays on the quiet, handsome Rocco (Delon) and erratic, hot-tempered Simone (Salvatori), both of whom fall for bewitching prostitute Nadia (Girardot).

A film of sizeable sweep and authenticity, "Rocco" is another near-masterpiece by Visconti. Though each Parondi brother is profiled, it's the emerging rivalry between Rocco and the mercurial Simone that drives the story forward. French actress Girardot would also achieve stardom playing Nadia, the woman of the streets who comes between them. Long, but amply rewarding throughout.