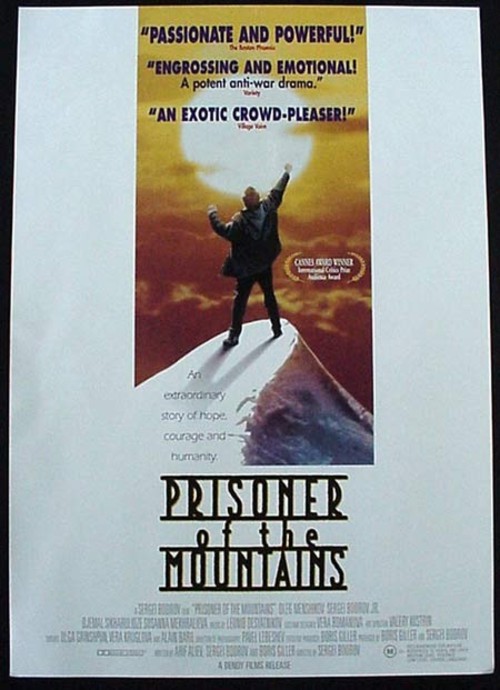 Prisoner of the Mountains

Sacha (Menchikov) is an experienced Russian soldier who has fought in three wars, while Ivan (Bodrov Jr.) is a fresh young recruit entering his very first battle against Muslim rebels in the Caucasus. When they are captured by Islamic separatist Abdul (Sikharulidze), he decides to keeps the pair alive, only because he wants to trade them for his imprisoned son. Chained together in a barn in a remote mountain village, Sacha and Ivan prepare themselves for torture and death. But as it turns out, the two soldiers not only survive, but over time manage to forge unexpected relationships with both their captors and one another.

Based (believe it or not) on a Leo Tolstoy short story, this Academy Award-nominee for Best Foreign Language Film has a deceptively simple premise that, thanks to the deft touch of director Sergei Bodrov and understated performances of the actors, becomes a meaningful allegory about war, peace, and tolerance. Despite underlying themes of cultural understanding and our (universal) shared humanity, "Prisoner" never veers into sentimentality, always keeping the specters of long-simmering hatred and violence just an arms length away. Still, the film's hopeful message comes through clearly, helped by bursts of stunning cinematography, beautiful landscapes, and delightfully black humor.