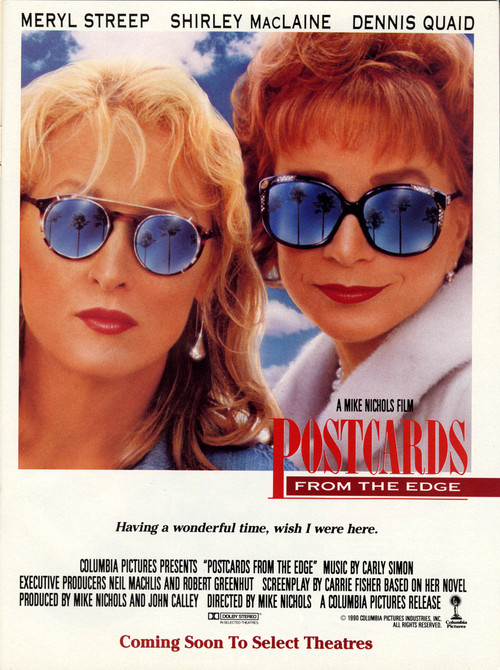 Postcards from the Edge

Suzanne Vale (Streep), a bona-fide Hollywood movie star, is living high until rampant drug use forces her into rehab. Starting her next picture clean and sober, Suzanne must deal not only with a suspicious crew, but also her mother, former song and dance star Doris Mann (MacLaine), whose high-wattage public persona morphs into (mostly benign) hysteria when playing the role of Mother. Then there's Lothario Jack Faulkner (Quaid), who's moving in on Suzanne at just the wrong moment. With all this to cope with, will our heroine make her comeback?

Based on Carrie Fisher's razor-sharp, viciously funny memoir, this under-appreciated Mike Nichols outing stands as one of the most trenchant satires of the movie business. To its great credit, "Postcards" manages to be fairly clear-eyed about the vagaries of Tinseltown, without betraying a trace of bitterness. The Oscar-nominated Streep gives her finest comedic performance to date, and MacLaine is every bit as good. Also look for Gene Hackman, Richard Dreyfuss, and Rob Reiner in cameo roles. If you love movies, this "Postcard" will send you!